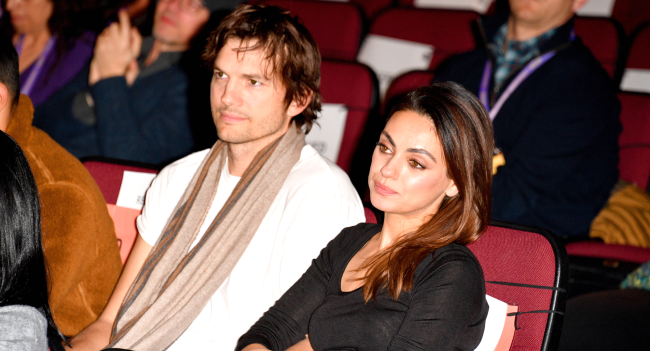 A couple of weeks go during an appearance on Dax Shepard’s Armchair Expert podcast, Ashton Kutcher and Mila Kunis revealed that they don’t believe in bathing themselves or their children very often.

“I wasn’t that parent that bathed my newborns, ever,” Mila Kunis admitted.

“If you can see the dirt on them, clean them,” added Ashton Kutcher. “Otherwise there’s no point.”

As one might expect, many people on the internet were completely disgusted by this bit of TMI from the famous couple.

“I’m a big fan of waiting for the stink,” Bell said on The View last week. “Once you catch a whiff, that’s biology’s way of letting you know you need to clean it up.”

“There’s a red flag. Honestly, it’s just bacteria; once you get bacteria you gotta be like, ‘Get in the tub or the shower.'”

After that admission, Jake Gyllenhaal also jumped into the bathing debate, telling Vanity Fair, “More and more I find bathing to be less necessary, at times.”

So, feeling the need to address the situation, Kutcher posted a video to Instagram of his wife Mila Kunis trying to bathe their kids Wednesday night with the caption, “This bathing thing is out of hand. #KutcherBathroomTalks.”

“You’re putting water on your children. Are you trying to melt them?” he jokes. “Are you trying to injure them with water? This is ridiculous, what’s going on? That’s like the fourth time this week!”

Thankfully, not every celebrity feels that bathing is merely optional.

Jason Momoa says he isn’t down with the concept.

“I’m not starting any trends. I shower, trust me,” he said. “I’m Aquaman. I’m in the f—ing water. Don’t worry about it. I’m Hawaiian. We got saltwater on me. We good.”

Dwayne “The Rock” Johnson was even more empathic when the subject was brought up.

“Nope, I’m the opposite of a ‘not washing themselves’ celeb,” The Rock said in response to a fan’s tweet.
“Shower (cold) when I roll outta bed to get my day rollin’.
“Shower (warm) after my workout before work.
“Shower (hot) after I get home from work.
“Face wash, body wash, exfoliate and I sing (off key) in the shower.”

And this is why we love you, bro.