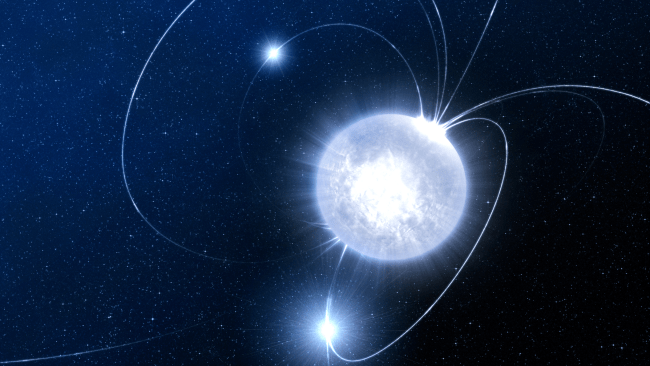 Astronomers have announced the discovery of a mysterious pulsing object that emitted a large pulse of energy every 20 minutes.

The repeating radio wave signals were detected during the first three months of 2018 then suddenly stopped.

“This object was appearing and disappearing over a few hours during our observations. That was completely unexpected,” said astrophysicist Natasha Hurley-Walker from the Curtin University, International Centre for Radio Astronomy Research (ICRAR) in Australia.

“It was kind of spooky for an astronomer because there’s nothing known in the sky that does that.

“And it’s really quite close to us — about 4,000 light-years away. It’s in our galactic backyard.”

Hurley-Walker and her team, which made the discovery, believe that after further research what they discovered was a neutron star – something that forms when a massive star, bigger than our own sun, collapses in on itself.

According to their report, published in the science journal Nature, it could be an ultra-long-period magnetar.

A magnetar is a neutron star with an extremely strong magnetic field that stores an immense amount of energy.

“It’s a type of slowly spinning neutron star that has been predicted to exist, theoretically,” said Hurley-Walker. “But nobody expected to directly detect one like this because we didn’t expect them to be so bright. Somehow it’s converting magnetic energy to radio waves much more effectively than anything we’ve seen before.”

Professor Andrew Norton, an astrophysicist at Open University, told the Guardian that a neutron star would normally lose energy and slow down, and “as they slow down you’d expect them to fade away. Once they drop below a theoretical calculation known as the death line, you shouldn’t be able to see them.”

Why are astronomers baffled?

What is baffling to the scientists is that this particular object was still emitting enough energy to be detectable when it was discovered in 2018.

They also have yet to understand why the signal suddenly vanished, and are monitoring it to see if it turns back on.

“If it does, there are telescopes across the Southern Hemisphere and even in orbit that can point straight to it,” Hurley-Walker added.

“More detections will tell astronomers whether this was a rare one-off event or a vast new population we’d never noticed before.”

A vast new population?! Now you have our attention.

Read more about magnetars and other recent discoveries like this here.