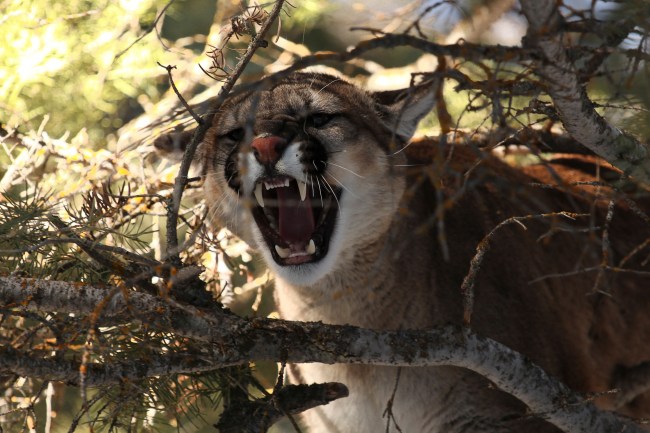 Back in February, the story of a jogger killing a mountain lion with his bare hands when the animal lunged at him at the Horsetooth Mountain Park near Fort Collins, Colorado garnered international attention.

31-year-old Travis Kauffman embarked on what he intended to be a routine 12 to 15-mile run, but about a quarter-mile encountered the big cat and was entrenched in a “full-on fight for survival.” Travis’ recollection of the story will get your heart racing and is definitely worth a read, but the cliff notes version is that Kauffman used a rock to deliver blunt force on mountain lion’s head before maneuvering his right leg to the throat of the cat and suffocating it.

Kauffman, who stands 5-feet-10 and weighs 150 pounds, escaped with his life but was brought to the emergency room where he received more than two dozen stitches on his face, a brace for his wrist, and was put on a regimen of antibiotics.

Jogger reveals how he throttled mountain lion to death during morning runhttps://t.co/wlpNVIRA4p pic.twitter.com/gToscIogCw

The Colorado Parks and Wildlife veterinarians in Fort Collins recently performed the final necropsy report on the slain mountain lion and estimates the age of the lion at three to four months, USA Today reports.

The vets described the animal as a “kitten” with a weight of 24 pounds. It’s important to note that the weigh-in was done after the animal had been heavily scavenged, so officials predicted the animal’s live weight was 35 to 40 pounds. Typical adult male will weigh 110 to 180 pounds and the female 80 to 130 pounds. While the animal’s sex was difficult to establish because of the scavenged sex organs, experts believe the animal to be male, as the pelvic region did not indicate a uterus.

What’s extra unnerving is that the necropsy claimed the “pattern of scavenging is reminiscent of feline predation” and one identifiable set of teeth marks was matched the size of the dead animal’s teeth, which could indicated that the mountain lion was eaten by its own siblings.

Colorado Parks and Wildlife spokesman Jason Clay told NBC News that he believed the lions to be orphaned.

“Mountain lions are solitary animals, only coming together for breeding,” Clay told NBC News on Friday. “We had no signs of an adult female being anywhere near the scene that day, or in the following days, which is one reason why we think these kittens were orphaned.”

USA Today reports that officials later trapped two lions in Horsetooth Mountain that are believed to be siblings of the killed mountain lion. Officials moved them to a wildlife rehabilitation facility where they will be fed to put on weight to increase chances of survival before being released into the wild.

If you’re freaked out about going hiking now, take solace in knowing that mountain lion attacks are extremely rare. There have only been 125 attacks, 27 of which fatal, have been documented in North America in the past 100 years. You have a better chance of getting struck by lightning than killed by a mountain lion.