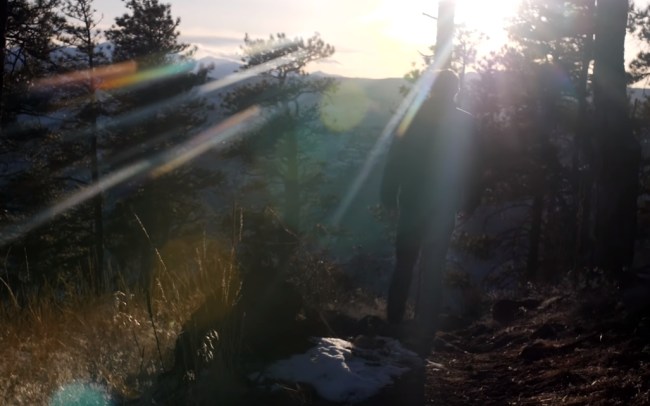 Via Colorado Parks and Wildlife

Last week the incredible story of a jogger killing a mountain lion with his own bare hands made headlines, but the victor of the man versus wild fight to the death was anonymous. Now the brute who defeated the mountain lion in self-defense has come forward to tell his amazing story.

Travis Kauffman was jogging at the Horsetooth Mountain Park near Fort Collins, Colorado when a mountain lion attacked him. On Thursday, the trail runner told his epic story to the public. Kauffman, a 31-year-old originally from Arkansas who has lived in Colorado for the last five years, went for a run on the trails on February 4th. Kauffman was planning to go on a 12 to 15-mile run that started at the Lory State Park, then he was abruptly attacked on the trail by the big cat.

Moments before meeting the national news media, Travis Kauffman and Annie Bierbouer embrace at our office.

Our live stream of the press conference will begin at 1:15 p.m. MT @CPW_NE pic.twitter.com/s6pReZrMCa

“I did my first towers run of the year…so I was running up the hill, finally made it up to the top…and went down a trail through the south…I heard some pine needles rustle behind me, and luckily I was able to actually turn my head,” Kauffman said. “This time, [it] happened to be a mountain lion, so one of my worst fears was confirmed.” Kauffman revealed that his heart “sank into his stomach” when he saw the big cat.

RELATED: Georgia Grandmother Strangles Rabid Bobcat With Her Bare Hands After It Attacked Her

Kauffman detailed the frenzied mountain lion attack and said it was a “full-on fight for survival.”

“I threw my hands up, and started yelling, and when I first turned around the cat was 10 feet away from me, and it just kept approaching, and when it got close it just kind of lunged at me, so I threw my arms up and it latched onto my wrist. So I was just kind of protecting my face…and then it just started clawing along my face, and then my legs, and I was just kind of screaming the whole time, doing my barbarian yell as best I could, and I tried to throw it off of me, and as I [tried], we both left the trail…and kind of tumbled off the slope…and from there it was just a wrestling match. I was able to get my left knee to pin down its back legs, because as a pretty new cat owner I realized that once you get a cat on its back, its back legs go crazy…so I was pretty wary of the back claws hitting my guts or my groin or anything like that, so I was able to pin down its back legs…and then the front paws, I don’t remember what happened with those. I was kind of deflecting them with my left hand, but then I was grabbing at some sticks that were close by, and I was trying to stab it in the throat with some sticks…I was able to pick up a big rock with my left hand, but that was kind of a tough angle because my wrist was still in its mouth…but I was able to hit it in the back of the head a few times…so I used a body weight transition and got my right leg close to my wrist and was able to finally get it on the cats neck. I stepped on the cat’s neck and was finally able to suffocate it.”

Kauffman said being a “cat dad” helped him in his “wrestling match” against the mountain lion. “Because I’m a recent cat owner, I know that the back claws are pretty dangerous when it comes down to an attack,” Kauffman told KUNC. “And I was pretty worried about its claws just sinking into my stomach and groin area.”

“One of the thoughts that I was having was like, ‘Well this would be a pretty crappy way to die,'” Kauffman said. “Just off on the side of the mountain, screaming and having this cat wrapped around my wrist. Then eventually another cat comes in and takes me out, and then getting eaten by a bunch of mountain lions. That wouldn’t be an ideal way to go.”

After killing the mountain lion with his own bare hands, adrenaline helped him sprint out of the area despite having numerous injuries. He thankfully encountered another runner by the name of Spencer. They then met two hikers, Noah and Rachel Wiarda, who helped Kauffman down to the Soderberg Open Space trailhead.

Rachel drove Kauffman to the Poudre Valley Hospital emergency room. That’s where Kauffman received more than two dozen stitches on his face, a brace for his wrist, and was put on a regimen of antibiotics. Kauffman received some relieving news after the necropsy on the mountain lion showed no signs of rabies. By the time officials for the Colorado Parks and Wildlife found the dead mountain lion, it was already being eaten by other animals. So there you have it, here’s some life advice on what to do if you’re ever attacked by a dangerous mountain lion.

Jogger reveals how he throttled mountain lion to death during morning runhttps://t.co/wlpNVIRA4p pic.twitter.com/gToscIogCw

RELATED: Watch This Lady Casually Wrangle A Huge Snake That Slithered Into Her Home