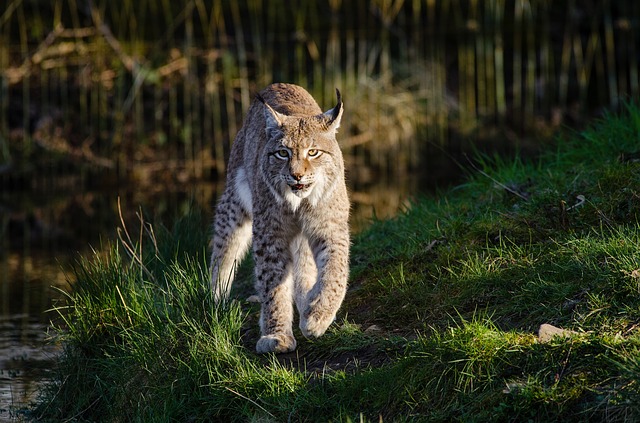 Does your grandma bake a killer strawberry rhurbarb pie? That’s all swell and good, but can she kill a rabid bobcat with her bare hands? This grandmother can and did. A grandma murked a bobcat when it attacked her. Nana: 1, Bobcat: 0.

Around 6:00 p.m. last Saturday, DeDe Phillips was taking a photo of the new bumper sticker she put on her truck. The 46-year-old grandma from Hart County, Georgia, had just applied the bumper sticker that said: “Women Who Behave Rarely Make History.” Little did DeDe know that this quirky bumper sticker would become her mantra for the immediate future.

Suddenly, a rabid bobcat was starring at her and then next thing DeDe knows is that it viciously attacked her. Nana’s survival instints kicked in and she took matters into her own hands. “It caught me slightly on my face, but I got him before he could do much damage there,” Phillips said. “I took it straight to the ground and started inching my hands up to its throat. I knew that was the only way I was getting out of this. Not today. I wasn’t dying today.”

The badass grandma began squeezing the cat’s neck and forced herself not to scream because she didn’t want to alarm her 5-year-old granddaughter to run outside and potentially be attacked. Once grandma had neutralized the wild cat, she screamed to her daughter-in-law to call 911. Soon after, DeDe’s son arrived at the scene.

Grandmother bloodied in bobcat attack, fights it with her bare hands before help arrives https://t.co/Zs2WAJq4vx pic.twitter.com/DapQb3muFR

“My son stabbed it four or five times, but it never budged so I knew it was completely dead,” she told Athens Banner-Herald. DeDe snuffed that aggressive feline with her own bare hands. “They go for your jugular, when they can get the vein you’re dead in a couple of minutes,” she said. Grandma DeDe ain’t nothing to mess with.

An ambulance arrived to take Phillips to a local hospital, but this is Grandma DeDe we’re talking about, so of course she drove to the hospital on her own. She was treated for a broken finger, as well as claw and bite marks to her chest, arms and legs. Officials said the bobcat tested positive for rabies, Phillips, who had suffered multiple, was forced to pay $10,000 for rabies vaccinations.

BOBCAT VS. GRANDMA: Dede Mealor Phillips told me her first thought when a wildcat attacked “Not today. I wasn’t dying today.” Her 5-year-old granddaughter was sleeping inside her home during the life-or-death struggle in her front yard. Her interview tonight at 11pm on @cbs46 pic.twitter.com/ARH2EC9FpZ

A crowdfunding campaign has been rolled out to pay for DeDe’s medical bills and it has already made more than $26,000, more than the original goal of $20,000.

“Thank God I am not a little woman,“ Grandma DeDe said. “Thank God it wasn’t my daughter-in-law or my granddaughter.” I’d much rather take my chances with an angry bobcat than an angry grandma, especially when you tell your nana that you’re not hungry.