This Alternate Ending To ‘Avengers: Infinity War’ Got Scrapped For Being Too Bloody And Dark 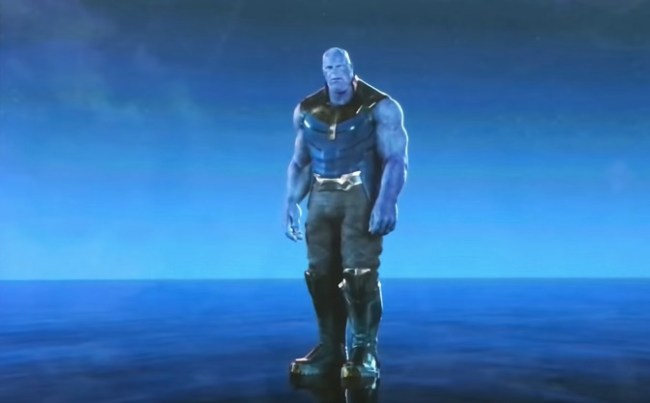 Heads up, my dudes. There are some Avengers: Infinity War spoilers ahead so if you haven’t seen the film yet then you should head out now because this article pertains to the ending of the movie.

Side note: I don’t know how in you wouldn’t have seen the movie by now. It has taken in over $2.046 BILLION at the box office worldwide. And it’s about to make another ass load of cash now that the film’s available on-demand across most major TV carriers. I cannot imagine how someone who is planning on seeing this film hasn’t seen it yet, but I digress.

So, what happened at the end of Avengers: Infinity War? The villain won, for now.

Thanos was able to gather together all of the Infinity Stones (Soul Stone, Reality Stone, Space Stone, Time Stone, Power Stone, and Mind Stone). In doing so, he became the most powerful being in the universe (that we know of) and was able to snap his fingers and wipe out half of the universe’s population in an instant.

In superhero movies, it’s not often we see the bad guy win but when Thanos snapped his fingers half of the most beloved MCU superheroes were wiped out in an instant including Spider-Man, my personal favorite Doctor (Stephen) Strange, and the Black Panther.

Fans were devastated. Half of what fans had come to love over the past decade was wiped out in an instant.

Then we see Thanos walking through some ethereal purplish-pink water and encountering a child Gamora but in the first version of the film it was set to be much more sinister. In this behind-the-scenes video from SlashFilm they take a look at how that scene was made and how the original version was scrapped for being too bloody.

The scene in question starts around the 3:40-mark in this video. I’ve set the video to start just before the 3-minute mark but you can jump ahead or back to the beginning if you want, it’s all pretty fascinating:

The villain walking through a lake full of blood, the blood of all the people he just murdered? Yeah, that’s probably a little too sinister for the MCU audience which includes a lot of kids, kids who are already devastated because some of their favorite characters just got murdered off.

READ NEXT: Josh Brolin’s Trainer Shared The Crazy Back Workout He Used To Get Jacked For ‘Deadpool 2’

As I’m sure most of you know, the prevailing theory is those characters aren’t permanently dead. The hope is that Captain Marvel (played by Brie Larson) will be able to reset the timeline and bring everyone back to life.

Here, the directors of Infinity War explain their decision to leave Captain Marvel out of the film but we all know her movie comes out next year before the untitled Infinity War sequel and it will somehow set up this MCU finale.

Captain Marvel was introduced in the post-credits of Infinity War when Director Fury sent her a message on an antiquated pager, giving hope to fans like myself that she’ll show up and everything will magically be fixed. I sincerely doubt that we’ll get a happy ending when it’s all said and done but I do think we’ll see the return of our favorite characters considering many of them already have planned sequels in the works with Marvel.

READ NEXT: Could Killmonger Have Taken Thanos Down? Michael B. Jordan Thinks So And Details Why