Google Doodle Celebrates The Life Of Avicii On His 32nd Birthday 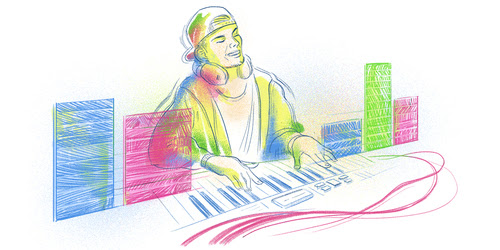 September 8th, 2021 would have been Tim Bergling’s 32nd birthday. As a special tribute to Avicii’s life and music, Google is honoring the late, legendary Swedish producer with an emotional Google Doodle, viewable on the Google.com homepage in 48 countries.

Avicii passed away from suicide in 2018 after struggling with mental health issues. He was 28 years old at the time. In the wake of his untimely death, Avicii’s father and mother, Klas and Anki, started the Tim Bergling Foundation to raise about mental health issues in a younger generation.

This week’s Avicii Google Doodle is a fitting public service announcement for a notable cause; this week also marks “World Suicide Prevention Week” – a worldwide reminder that anyone suffering from mental health issues isn’t alone.

Talk. Reach out for help. Realize you are loved and cherished, no matter what life has thrown at you. For more details, please check out this Suicide Prevention Week resource page from the American Foundation for Suicide Prevention.

The Avicii Google Doodle is a poignant reminder that Avicii may be gone, but his music remains immortal – living on forever as memories, both on festival stages and in the earbuds of an entire generation forever.

Avicii was truly a pioneer of a once-in-a-generation electronic music scene, rising to mainstream success in the early years of 2010s. His concerts and festival sets were electric. There’s no denying that “Levels” is one of the greatest pop dance songs of all time. In his short but brilliant career, Avicii influenced thousands of artists, producers, and fans, leaving behind a very specific cultural mark on a rising digital generation.

The Google Doodle blog features an interview with Tim’s parents. A few notable excerpts from the interview:

Was there a moment when you understood how musically talented he was?

Klas: When Tim was about 10-years-old, he sang the Swedish national anthem at full capacity. He really lived in the moment when doing that, and it was times like this I initially understood there was something special there.

Being part of a generation that didn’t grow up with house music, I used to view it as a monotonous, repetitive beat. When I started taking power walks back in the early days of Tim’s career, listening to his music, I realized what beautiful melodies were captured within the songs. It was an “aha moment” —  this is really music — and I started needing it to get me going. Tim produced more melodic songs over the years, with “Bromance” being one of the big eye-openers to his talent for me personally.

People everywhere grieved Tim’s passing and celebrated his legacy — what has that been like for your family?

Klas: It’s given us great support in our sorrow and grief, a privilege we understand few in the same situation experience. You’ll always feel alone in a sense, but the love we’ve received from all around the world has meant a lot. I truly believe the small things — a smile, a short note — mean so much to people who are grieving. It can be hard to know what to do, and you often feel like whatever you do it’s not enough, but a few words often go a long way.

Is there a song of Tim’s that has a special meaning to you?

Klas: I always come back to the song “Bromance.” The song stands for so much that Tim was, and sends a message of friendship, which was always important to Tim.

Created by Google Doodle artist Alyssa Winans, the sketch and video are paired up with Avicii’s 2013 anthem, “Wake Me Up”, featuring scenes from the producer’s life.

We miss you, Avicii. We miss you so incredibly much. Thank you for sharing your gifts – we’re all better for them.