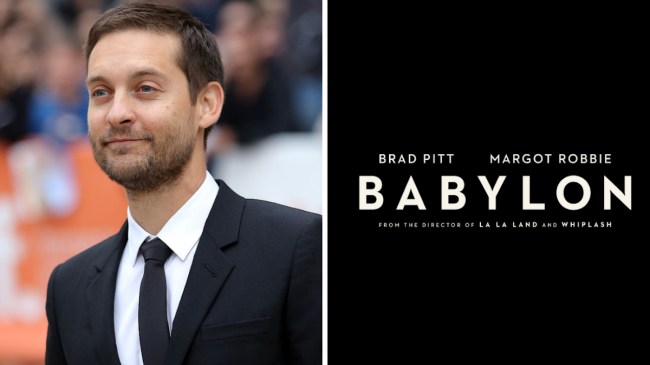 Following his epic return to acting in Spider-Man: No Way Home, Tobey Maguire now finds himself alongside the likes of Brad Pitt and Margot Robbie in Damien Chazelle’s upcoming award-season contender Babylon.

Earlier this week, Vanity Fair released official first-look photos from the film that show a particularly ghoulish-looking Maguire alongside the likes of Pitt as movie star Jack Conrad and Robbie as aspiring actress Nellie LaRoy.

According to the Vanity Fair piece, “the film juxtaposes the gorgeous, Hollywood-glam set pieces of [Chazelle’s movie] La La Land and the darker examination of ambition’s toll with Whiplash.

Babylon is directed by Damian Chazelle, the acclaimed filmmaker behind projects such as Whiplash, La La Land, and First Man. At this time, a trailer for the film has yet to be dropped, although the release of these first-look photos suggests the first teaser is around the corner.

Given Chazelle’s Academy Award track record — J.K. Simmons won Best Supporting Actor for his work in Whiplash, while La La Land was nominated for Best Picture (and infamously lost to Moonlight) — it certainly wouldn’t be surprising to see Pitt and/or Robbie compete in the Best Supporting categories at next year’s Oscars.