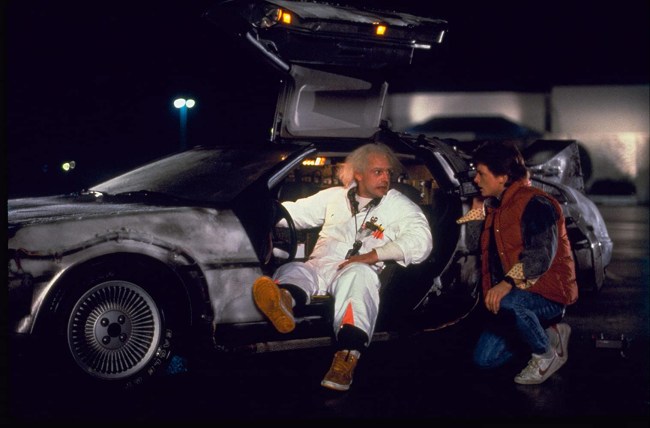 Before we get into the thick of the article, can we just take a moment to appreciate Marty McFly’s fit? You could tell me he was dressing for the year 2020 and I’d believe you. A fictional movie about time travel has now become a study on the phenomenon in and of itself: does McFly’s wardrobe look fashionable to us because it was somehow ahead of its time, or because Back to the Future shaped our idea of what’s cool, thus resulting in perceived modernness. I just blew your mind, didn’t I? I call that a regular Thursday morning where I come from.

Anyway, on to the plot hole: how come Marty’s parents were never, like, “Wait a minute, why does our son look exactly like that dude Calin who A)Lorraine wanted to smash and B) helped us hook up in the first place?” Seems like that’d be something a longtime married couple would remember.

Well, we’ve now got our answer, courtesy of The Hollywood Reporter:

“Bear in mind that George and Lorraine only knew Marty/Calvin for eight days when they were 17, and they did not even see him every one of those eight days. So, many years later, they still might remember that interesting kid who got them together on their first date,” said Bob Gale, the screenwriter of the film.

He continued, “But I would ask anyone to think back on their own high school days and ask themselves how well they remember a kid who might have been at their school for even a semester. Or someone you went out with just one time. If you had no photo reference, after 25 years, you’d probably have just a hazy recollection.”

“So Lorraine and George might think it funny that they once actually met someone named Calvin Klein, and even if they thought their son at age 16 or 17 had some resemblance to him, it wouldn’t be a big deal. I’d bet most of us could look thru our high school yearbooks and find photos of our teen-aged classmates that bear some resemblance to our children.” [via The Hollywood Reporter]

There you have it, case closed. Hopefully, when they eventually remake this movie with Tom Holland and Robert Downey Jr., they leave the pseuo-Freudian-Mom-and-Son subplot out of it.

RELATED: This ‘Back to the Future’ Deepfake With Robert Downey Jr. And Tom Holland Is Utterly Brilliant