Can We Finally Ban BBQ Restaurants From Putting Smiling Pictures Of The Delicious Animals We’re Eating On The Wall? 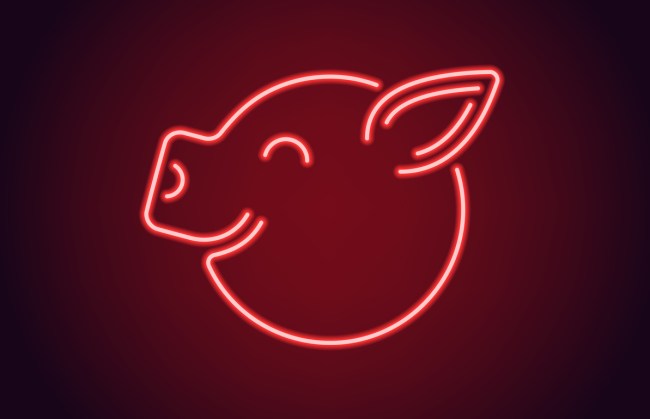 Like a lot of people out there, I am a big fan of barbeque (or, to people in the know, “BBQ”).

In fact, the mere mention of the words “smoked meats” causes a Pavlovian response in which my mouth begins to water and a tingling sensation takes over the entire left side of my body. While some doctors would consider that a warning sign of a stroke, I call it a completely natural response to one of nature’s most perfect foods.

BBQ taps into the primal part of your brain; the part that polite society thinks should be suppressed.

Knives and forks can be eschewed in favor of using your hands to eat like our Neanderthal ancestors. Even the basic tenants of BBQ can be grunted out in three simple words that the underdeveloped mind of Australopithecus would have no problem understanding: Meat. Fire. Good.

It’s also a time where I can impress people by liberally using terms that I learned from watching Food Network like “smoke ring,” “bark,” and “butt.”

The moment I sit down at the table in a BBQ restaurant with my metal tray — the standard canvas for an array of smoked meats — is pure ecstasy.

At least until I glance at the walls.

For some reason, just about every BBQ joint I’ve ever been to decides to decorate their walls with anthropomorphic versions of the still-living versions of animals I’m cramming into my mouth.

It’s hard to enjoy a pulled pork sandwich while staring at a happy cartoon pig that’s wearing a cowboy hat and twirling a lasso and there’s something less pleasant about shoving brisket into my dumb face while looking at a cow that visibly enjoys riding a motorcycle.

They’re nothing but reminders of the slaughtering that took place so that I could get a bite to eat—or, more accurately, a series of scrumptious bites.

It’s like the proprietors of the restaurants are trying to use a Jedi mind trick to make me think that the animals I’m eating were on board with this whole thing; that they were “partners” in this endeavor.

Call me crazy, but I just don’t believe for a second that they were thrilled about the prospect of taking a No Country For Old Men-style bolt through the noggin before winding up caked in a dry rub, smoked, and served alongside coleslaw and cornbread.

For some reason, this phenomenon only seems to happen in the food world and most frequently at barbeque restaurants. To my knowledge, there are no leather shops out there where you go in to buy a jacket and are greeted by a mural of cows high fiving, swan diving into swimming holes, or playing Skee-ball.

A lot of animal lovers find it unconscionable to consume any living creatures. I don’t have any problems with it, which is why I’d describe myself as more of an “animal liker.” I think animals are incredible and beautiful but they’re also fucking delicious. Those things aren’t mutually exclusive.

It’s the reason I won’t watch any of the documentaries about the food industry that people tell me I need to see. “It’ll change the way you look at food,” they say. “You won’t want to eat steak or chicken ever again once you’ve seen it.”

That’s not something I want to happen. I’m fine with the personal arrangement I have with the animal kingdom and which members of it I consume. Basically, as long as it’s not my dog, not much is off the table.

Don’t get me wrong. I’m not into the idea of pigs or any animal being killed but I’ve also eaten their ribs and I can confirm that they’re delicious.

As humans, we are burdened with responsibilities that come with being the undisputed champions of the food chain but it’s still my right to enjoy the deliciousness of smoked swine and/or bovine while also ignoring how that meat arrived on my tray in the first place.

I don’t need any reminders—whether cartoon or photorealistic—while I’m trying to eat. I can think about it at any other time, just not then. I don’t care that the chicken in the picture hanging on the wall is wearing sunglasses or not; it’s reminding me of the process by which it was transformed from living, breathing fowl to a mouth-watering serving of poultry.

Whether it was the goal or not, these pictures and decorations make me think of the carefree lives the food had before it wound up on my tray and how that has since been taken away. There was once a time when what ultimately becomes your meal happily rolled in slop, grazed in vast rolling fields, and—if some of the pictures I’ve seen in restaurants are to be believed—rollerbladed.

Sure, the livestock industry may be directly contributing to climate change but let’s save that discussion for a time when I’m not about to consume a copious amount of BBQ.