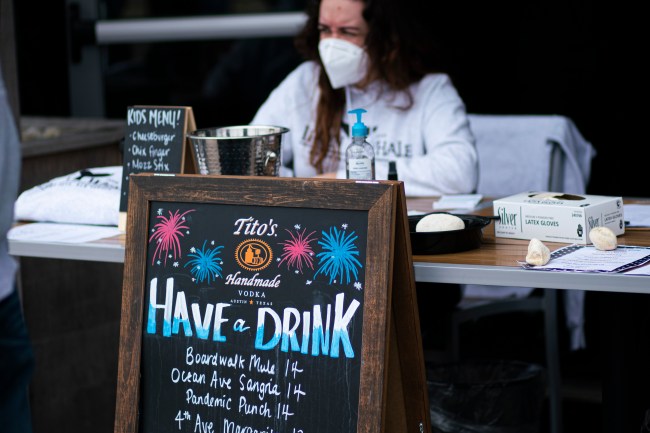 In 1849, Henry David Thoreau published Civil Disobedience, in which he argues (if my memory of the political science class I took during my freshman year of college is correct) it is the duty of a country’s citizens to prioritize their moral convictions over government regulations that go against them.

The work was inspired by the writer’s disgust over slavery and the Mexican-American War and his views were fairly radical in the sense that he wasn’t opposed to people staging an outright revolution to right perceived wrongs. However, others like Gandhi and Martin Luther King Jr. would eventually adopt his views with an emphasis on the “civil” aspect by encouraging passive resistance and nonviolent protests to call attention to injustice.

While this may be a far less admirable cause, I’ve always been of the opinion that open container laws that keep the tiny paper bag industry in business are an incredibly antiquated concept, and while I can understand the rationale behind them, I still question what is really being accomplished by writing someone a ticket for popping a bottle of rosé while chilling on a blanket in the park on an idyllic summer day.

With bars around the world forced to shut their doors a couple of months ago, drinking establishments scrambled to figure out a way to weather this current storm, and a few weeks ago, I started to stick it to the man when I realized it’s still possible to do a bar crawl with social distancing in mind as more and more businesses start to serve up drinks you can consume during the five times you go out in public on a monthly basis.

Based on the number of people I’ve seen while walking around who are drinking from plastic cups filled with lime-colored concoctions and liquid that could be confused with apple juice if it wasn’t for the suspicious foam on top, I’m not the only person doing the same thing. However, I can’t say I’ve noticed a major uptick in people puking on the sidewalk, peeing on walls, or any of the other social ills I assume bans on drinking in public are supposed to prevent.

Now, it appears politicians have begun to realize the increased normalization of this practice hasn’t resulted in society collapsing on itself, and as a result, it looks like it may become the new normal (at least for a while) based on some legislation that has been proposed in a number of states.

Lawmakers in New York have introduced a bill that would let bars both allow patrons to depart with drinks and deliver them directly to their homes for the next two years, while Illinois passed one that will permit them to do the same until next spring. Pennsylvania’s absurd approach to booze already allowed bars to let customers buy beer and wine for takeaway, but they’ll soon be permitted to sell cocktails as well until the state reaches a point where 60% capacity at those businesses becomes feasible.

While these may technically be temporary, it’s not a stretch to think they could become permanent if it’s found the economic benefits outweigh whatever negative social impact they may have (especially if businesses are still attempting to recover from a situation with seemingly no end in sight).

It should be noted that most of these bills don’t include a potential repeal of open container laws and require businesses to serve them in a manner that complies with them, although Michigan is also exploring the possibility of allowing cities to create designated districts where people can consume the drink(s) they picked up.

With that said, bars can’t get in trouble for what you decide to do once you depart with your purchase and some of them aren’t exactly discouraging people to wait until they get back to their place to start enjoying it.

This whole crisis might not exactly be the most pleasant experience overall but at least there’s a little bit of good that’s coming along with it.