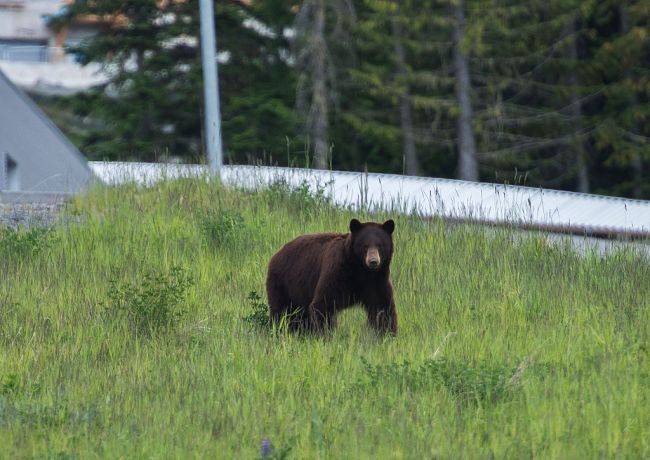 Mountain biker Philippe Schlesser was out for a ride in the backcountry of British Columbia earlier this month when nearly collided with a bear.

Kamloops, B.C. is known for its breathtaking mountainous scenery, so Schlesser had his GoPro rolling to capture the single track trail. Little did he know, it would film the harrowing moment when he ended up on a direct collision course with a bear.

As Schlesser hauled down the trail, you can see the bear keeping pace with his bike off of his right shoulder. Running parallel with one another for awhile, the bear runs out of sight.

Schlesser can be heard making clicking sounds with his mouth in efforts to deter any wildlife, but it didn’t work in this instance.

With the bear out of view, Schlesser continued to move down the trail before it momentarily returned and then disappeared again. Seconds later, Schlesser came face-to-face with the bear. He let out an audible “WOAH!” and came to a stop.

The bear simultaneously slammed on the breaks and made a quick U-Turn, seemingly as frightened by Schlesser as he was by the bear. Both the bear and Schlesser came within a few feet of one another but avoided the potentially horrific collision.

After the bear departed from view, Schlesser came to a complete stop and growled at the bear with hopes of it staying far away. Before the video cuts, you can see Schlesser grab his (what appears to be) bear spray from his backpack.

Fortunately, he did not need to use the spray and did not come in contact with the bear again. The terrifying moment resulted in an epic video.