Let’s Settle This Beer Drinker’s Debate Once And For All: Bottles Or Cans? 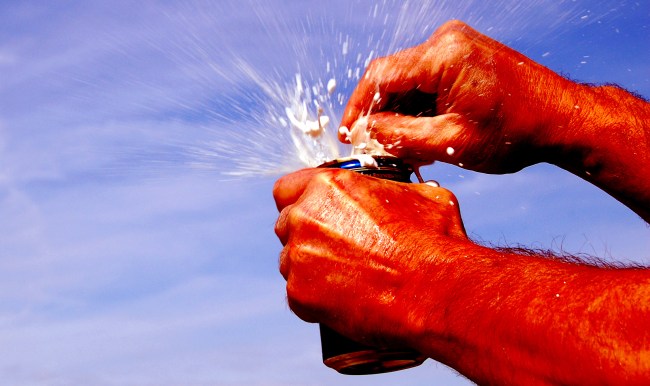 “Whenever I see a man drinking out of a can, I think, now there is a damn fool.” – Charles Bukowski

I have to side with Hank on this one: When it comes to beer, bottles are better than cans. It’s okay if you disagree. You might be one of those guys who thinks aluminum is vastly superior to glass. Well, I suppose that’s what being a real beer drinking American is all about: Having the freedom to choose, even when you’re dead-ass wrong. You have the right to suck down whatever sudsy beverage you want, whenever you want and out of whatever vessel you care to. Far be it from me to try and take that from you. We’re all beer lovers here, so just know that I’m on your side — for the most part. But come on, fellas, you have to admit, there’s just something about holding a 12-ounce bottle that makes complete and total sense. I don’t know what it is really. It could be that the clinking noise just sounds like music coming out of the refrigerator at the end of a long day, or maybe, just maybe it is more profound than all of that. Perhaps the allure of the bottle has something to do with its phallic-like qualities. It’s possible that on some sick and twisted level, gripping one satisfies some primitive urge to play with ourselves. It would probably take years of psychoanalysis to figure it all out. All I know is when I venture outside into the big, bad world to make a beer run, I’m always going to choose bottles over cans.

It’s an argument that has divided the beer drinking community for years, probably even decades. And everyone has an opinion on the subject, yet nobody seems to understand why they feel the way they do. Sure, there are those barstool loiterers who don’t really give two flying squirts if the beer comes from a bottle or can, as long as it keeps on coming. Yet, in these bizarre days of bearded hipsters, beer snobs and the ultra-sensitive, you had to expect the debate would eventually come to a head and perhaps even spawn some radical new movement. Because from what I can tell, cans (freaking cans, man!) are leading the charge. A lot of craft brewers are now using them instead of bottles for the purpose of convenience and sustainability. But cans are also becoming more popular among the consumer because apparently, a large group of beer drinkers is under the impression that it tastes better that way. Well, get your knees off my longneck, motherhumpers! The time has come to settle this once and for all.

Those of us who used to swipe cans of Pabst Blue Ribbon from our father’s mini-fridge when we were teenagers have spent a long time complaining that canned beer tastes like carbonated water and a stack of dirty pennies. But we never had to worry about the taste of metal on our tongues with those trusty bottled beers. But was it all an illusion? Some would say “yes.” Many of today’s beer aficionados would swear that there is absolutely no difference in flavor between the beer that comes out of a can versus a bottle. This attitude is based mostly on the fact that aluminum cans have been lined with protective substances since the 1930s to maintain flavor integrity. That metallic tang, they claim, has more to do with the quality of the beverage than the actual container. “Try pouring your beer into a glass and try again,” wrote Mairyn Chorney for Just Beer. “Most of the time, that metallic “flavor” you’re sensing is instead the scent of the beer can.”

Okay, maybe that’s true. But it doesn’t really sell me on the idea that cans are the better vessel. If anything, it scores a point for the bottle. I mean, there are plenty of times when pouring canned beer into a glass to avoid the metallic taste isn’t exactly optimal. We typically don’t drink beer out of a mug when we go boating, fishing, or engage in any of the backyard functions associated with summer. If what Chorney says is correct, we’re better off drinking from bottles because it eliminates the pain of having to transfer it to another glass. After all, it’s already in one!

What appears to be true is that most people cannot tell the difference between bottles and cans, but only when the beer is poured into separate drinkware. A few years ago, a study published in the journal Beverages found that when drinkers were oblivious to whether a beer was coming from a bottle or can, they almost couldn’t tell which was which. Even still, bottled beer won the battle over cans by a slight margin. Interestingly, it was only when the respondents were made aware of the type of container the beer was coming from before being served that most of them (nearly 62%) said they enjoyed the bottled beer the best.

Overall, the study indicates that these packaging preferences are really all in our heads. Still, there’s this perception among younger craft beer fans that cans are where it’s at. A lot of this has to do with them being more environmentally conscious and focused on leaving a smaller carbon blueprint than anything else. Some argue that freshness is also a factor, and since cans are opaque and do not allow damaging UV rays to penetrate the packaging, they are the better option. It certainly seems the brewing industry is headed in this direction and it has nothing to do with quality or flavor. It’s all about protecting the Earth. Hank would undoubtedly roll over in his grave, but it looks like the hippies are going to win this one. All we can do is raise a glass (not a can, a damn glass bottle) and toast the future. Sure, we might hate you, but at least you’re still serving beer.