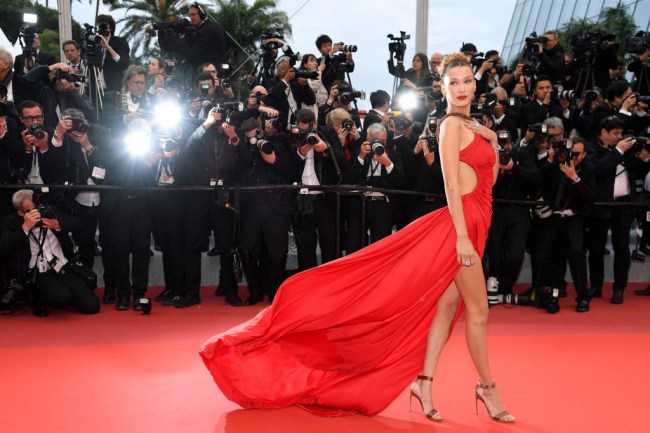 These are truly trying times. We all know we need to change our behavior, but it can be difficult because we’ve never encountered anything like the situation that we’re all experiencing right now.

Some tone-deaf celebrities attempted to ease our genuine fears and urged us to quarantine by singing John Lennon’s Imagine from their mansions that are probably equipped with a bowling alley, a catering staff, wine cellar, a putting green, movie theater, and complete game rooms as you struggle to drag a 50-pound bag of basmati rice, 23 cans of pinto beans, and four packages of toilet paper into your 690-square-foot apartment where you’ll be locked up for another two months with your roommate who plans on surviving by microwaving Gorton’s fish sticks on the daily.

But Bella Hadid employed a much more practical and shrewd modus operandi in attempting to suggest that people should alter their conduct to try to help society during these dire state of affairs. Bella Hadid subscribes to the “You catch more flies with honey than you do with vinegar” mantra, so instead of lecturing people, the supermodel grabbed people’s attention with two things that everyone treasures: boobs and burritos.

RELATED: a href=”https://brobible.com/culture/article/most-beautiful-woman-in-world-bella-hadid/” rel=”noopener” target=”_blank”>Scientific Calculations Say Bella Hadid Is Most Beautiful Woman In The World Ahead Of Beyonce And Amber Heard

In an Instagram post, the 23-year-old model encouraged people to “stay inside,” “not be selfish,” and to “wash those damn hands.” Hadid ditched her shirt to compel people to change their behavior, while also eating a burrito.

In the topless photo, she provided some activities that people could do now that they have a lot more time on their hands, such as meditate, hang out with pets, learn how to knit, tie-dye socks, or write a poem to your mom.

Me and my burrito telling you to stay inside! not only for the sake of just yourself but also for literally the entire world and all of the people that you love ..❤️ Its crazy because all we have to do is work together to slow down this virus and people are still having trouble understanding that.. don’t be selfish! meditate ! hang out with your dog/cat/fish! they are probably super excited to have your attention for 24 hours out of the day..!! learn how to knit ! tie die some socks ! write a poem to your mom ! I guess tiktok if that’s what you’re into ! find out your rising sign ! then learn about it ! and become ! a better person! anyways … last thing …not new news but… wash those damn hands people! to the people who are still working and the ones who can’t … I love you and i am thinking about you !..❤️

She is utilizing her curves to flatten the curve. We need more PSAs like this.

In another Instagram post, she wrote: “Me, switching up my looks in the morning for a nice day of self quarantining on the couch.”

Me, switching up my looks in the morning for a nice day of self quarantining on the couch cc: @voguekorea @luigiandiango @georgisandev @hyunji_nam

Our health officials have been superb during this time of crisis, but maybe they should consider adding Bella Hadid to the task force as a spokesperson. She has exceptional and persuasive communication skills.

RELATED: Bella Hadid Kissed A Female Robot In An Ad And Calvin Klein Was Forced To Apologize After Backlash