Belle Delphine, Cosplay Model Who Went Viral For Selling Bathwater, Banned From Instagram Where She Had 4.5 Million Followers 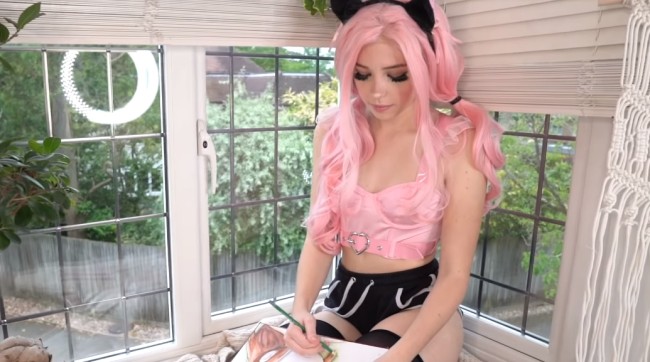 It was only a few weeks ago when Belle Delphine went viral for selling her own bathwater to “thirsty gamer boys.” But nothing is guaranteed in the world of cosplay models. One second you’re on top of the world selling your soapy bathwater, the next second you lose everything after Instagram bans your account with over 4.5 million followers. Life can be so cruel.

Belle Delphine is a British cosplay model and internet personality. Belle calls herself the “weird elf kitty girl” and she models herself after Japanese anime. Belle has cemented herself in “nerd” and gamer culture.

Two weeks ago, the 19-year-old influencer started selling her bathwater on Instagram “for all you THIRSTY gamer boys.” She sold a small jar of “Gamer Girl Bath Water” for $30. One could surmise that the entrepreneurial young lady gets pretty good profit margins on selling jars of bathwater.

However, Delphine is figuratively taking a bath now because Instagram has banned her. Apparently, Belle Delphine violated the social media platform’s rules and her account with over 4.5 million followers was taken down by Friday morning.

When you go to the official Belle Delphine Instagram page it reads: “Sorry, this page isn’t available.”

Donate to Belle’s patreon for more content (link in bio)

A spokesperson for Instagram told Business Insider that Belle violated the company’s community guidelines, but did not specify exactly how she breached the terms of service or if the ban was temporary or permanent.

RELATED: Influencer Has Hysterical Meltdown On Video After Instagram Deleted And Cries At The Thought Of Getting 9-5 Job

There seems to have been a coordinated campaign to get Belle in trouble, but Instagram claims they do not ban accounts based on mass reporting. Numerous users reported Belle for nudity, including this user. “I just deleted an account that had 4.5 million fans I’m gonna get a lot of hate rip me,” the account wrote with a screenshot of reporting Belle to Instagram.

I just deleted an account that had 4.5 million fans I’m gonna get a lot of hate rip me

Thoughts and prayers to Belle during these trying times.

@belle.delphine Wish she would bring back this wig. It looks really nice imo

RELATED: Influencer Must Pay $22K And Gets Banned From Youtube After Feeding Homeless Man Toothpaste-Filled Oreos