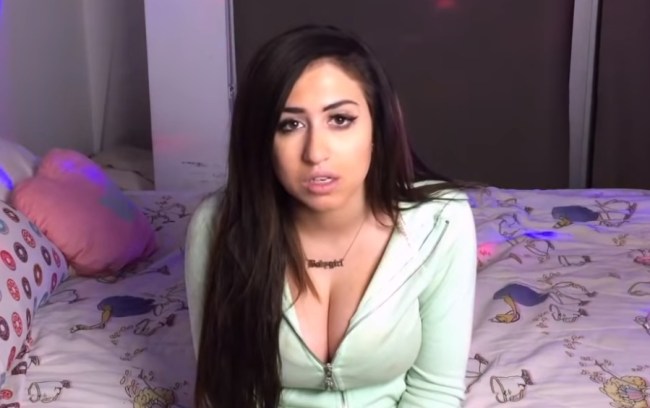 An influencer had a meltdown for the ages, but don’t worry, it was for a totally legit reason… she had her Instagram deleted. Oh the humanity! Vlogger Jessy Taylor suffered an embarrassing breakdown in a YouTube video after admitting she had no actual talents and cried when she contemplated getting a 9-5 job. Oh the humanity! Jessy is now facing scrutiny from another video where the influencer says she is a racist.

Jessy Taylor got exactly what she wanted this week when she went viral. However, the method she went viral — being ridiculed by the internet, was probably not her preferred way of going viral. But she still gets those views, which helps dry all of those tears. The YouTube video titled “STOP REPORTING MY INSTAGRAM ACCOUNT” has over 420,000 views.

This week influencer Jessy Taylor delivered a tearful video when she lost her mind after her Instagram account was allegedly deleted. Taylor claims that her Instagram that had more than 113,000 followers was deleted after people kept reporting her account. “Hi guys, I’m in the middle of editing and my Instagram got deleted,” Taylor explained. “I’m trying to get it back, I’m calling everybody I can and I don’t know why it’s not working out for me.”

“And when people try to hate on me or report me I’m literally trying to be a f*cking better person,” Jessy said in a very “leave Britney alone” tone. “I want to say to everybody that’s reporting me – think twice because you’re ruining my life, because I make all of my money online, all of it and I don’t want to lose that.”

RELATED: 25-Year-Old Live-Streamer Makes $4,000 A Month By Asking Followers For Money To Pay For Rent, Weed And Video Games

“I’m nothing without my following, I am nothing without my following,” the 20-year-old Taylor said, which might be the most pathetic thing you’ll ever hear in your life. This is like if the Fyre Festival was a person. Taylor, who is a MFC model, has since started a new Instagram, which she should have done in the first place instead of crying over an Instagram account because there’s no use crying over deleted Instagram accounts.

So maybe Jessy will just get a regular job? Ixnay on the regular job-nay. “I know people like to see me be down and be like them and the ninety percenters – the people who work 9-5 – that is not me, I am in LA to not be like that,” the less talented version of the Cash Me Outside girl proclaims. “I’ve worked so f*cking hard to get to where I’m at and for that to get taken from me is the worst feeling in the world.” Maybe she could learn to code?

The excerpts from the YouTube video are actually very sad, especially when you think that someone’s entire existence and happiness is based on how many Likes, hearts, and shares they get from strangers on the internet.

Then there is another video where Jessy proclaims that she is a racist. She says she’s hotter than another girl because the other woman is black. “I am a racist,” she is heard saying in a video.

There are also reports that another woman in Mississippi has a restraining order against Taylor. Allegedly, Taylor purposely put chlorox toilet bowl cleaner in the woman’s shampoo and conditioner bottles in October of 2016. The woman unknowingly used the tainted shampoo and conditioner and subsequently had a burning feeling and broke out into a rash.

Hopefully, Jessy Taylor steps offline for a while and gets the help she so very desperately needs.