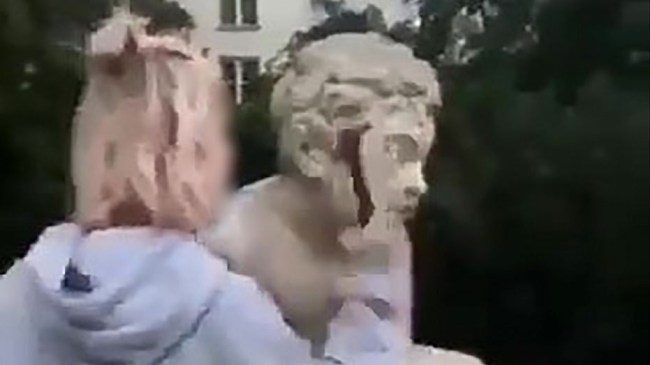 An Instagram model thought she had a brilliant idea on how to get more followers — destroy a 200-year-old statue. Bold move Cotton. Julia Slonska smashed the historic statue and did it for the Gram. Julia’s attempt to go viral was successful, but it was because everyone was angry that she broke the long-standing statue. Congrats?

The Polish model was in the Swiss Valley Park in Warsaw with her friends on May 11. They live-streamed video of Julia Slonska smashing the nose off of an angel statue. In the 6-second video, Slonska can be seen ruining the statue with a hammer as laughter can be heard in the background. The original live-stream was uploaded to her friend’s Instagram and then deleted, but it was uploaded to YouTube where it has nearly 100,000 views.

Not only did Julia get pummeled online, but the Instagram model also lost an acting role with Polish bank mBank. After the public backlash, mBank dropped Slonska from any future advertisements.

“We definitely do not support such behavior, and the appropriate services should deal with it. As for the responsibility for what the actress does many weeks after the completed photos are taken — we cannot be responsible for the individual choices of such people,” a spokesperson for the bank said. “We do not plan to involve this girl in the next spots.”

“I’m so stupid. I will not say what was driving me, why I did it, because it is more of a private affair, but I really want to apologize to everyone,” Slonska said.

Slonska said she was drinking in the park with friends before committing the “silly prank.” She admitted that she “just wanted to play Minecraft.”

ProTip: Don’t do it for the Gram.

RELATED: Do It For The Gram: Influencer Travel Couple Dangles Over Bali Infinity Pool For ‘Dangerous’ Instagram Photo