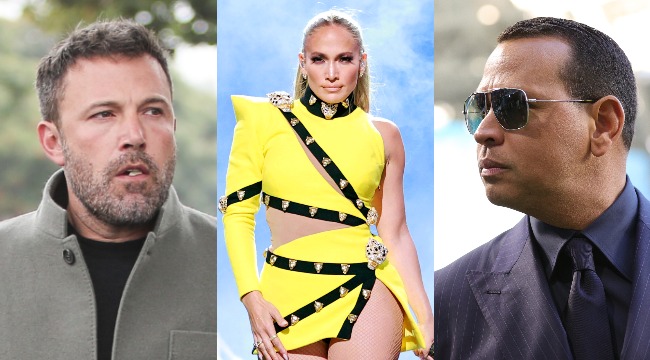 We are one TMZ story away from Ben and A-Rod bare-knuckle boxing on the undercard of the Mayweather/Paul fight and you are all invited over my place for the watch party. PPV is on me if you bring a sixer and your famous seven-layer dip.

Just hours after it was reported that A-Rod is “shocked” and “saddened” with J-Lo’s romantic reunion with Ben after 16 years, Mr. Rodriguez has taken yet another blow to the psyche.

According to a report by TMZ, Affleck began sending J-Lo flirtatious emails when she flew to the Caribbean to begin filming Shotgun Wedding. At that time, she was still engaged to Rodriguez.

(We should’ve seen it coming. The Side Lip Kiss is a troubling indicator).

For instance, after seeing pics of Jennifer in the D.R., he wrote to tell her how beautiful she looked, and how much he wished he could be down there with her. Of course, he was busy at the time in Boston, shooting “The Tender Bar” with George Clooney — and she was still engaged to Alex Rodriguez.

Our sources say the emails also referenced J Lo’s love for Ben’s writing, and included a line about him being able to “own her heart” with his pen.

I’m not here to yuck on someone’s yum, but if history’s taught us anything, it’s that celebrity relationships by nature are about as stable as a giraffe on stilts. So while it’s funny to delude ourselves with monikers like Bennifer <3 and Benny From The Block, my money is on the pair splitting after six weeks and moving on to the next shiny object on the horizon.