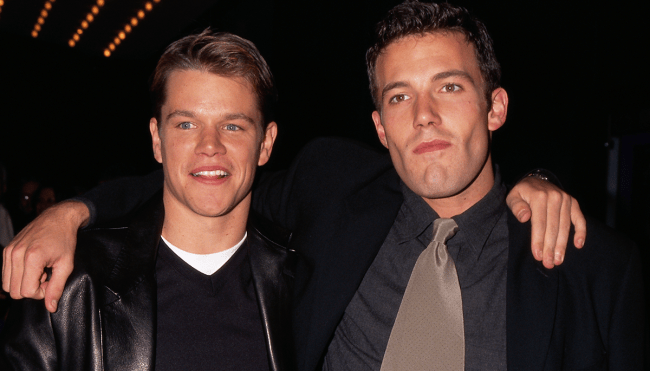 When Good Will Hunting came out in 1997, it marked the beginning of Ben Affleck’s and Matt Damon’s ascension to Hollywood royalty. While the duo rightfully earned the trophy for Best Original Screenplay at the Academy Awards, they also deserve some credit for their performances in the film (which netted the latter a nomination for Best Supporting Actor), as they had some impressive chemistry on the screen thanks to their longtime friendship off of it.

They might’ve technically been acting, but it’s obvious they’d spent years honing their banter as high school buddies in Massachusetts and roommates in the Los Angeles apartment where they wrote the script. I also have no proof this is the case, but I really want to believe Affleck had a habit of going to Dunkin’ to grab some coffee before waking Damon up in the morning.

Earlier this year, Damon revealed he and Affleck resorted to showing landlords an article about the pending release of Good Will Hunting because they were too broke to pay rent. However, based on a story Affleck recently shared while chatting with Complex, there was a period where the two didn’t have to stress as much after they hit it big in Las Vegas with a little bit of help from Larry Bird.

Affleck said that Damon joined him on a cross-country trip after the former traded coasts in the hopes of breaking into the movie industry, and when the two diehard Boston sports fans found themselves in Indiana, they decided to make the pilgrimage to Larry Bird’s house:

“We went to French Lick and we were like, “Where does Larry Bird live?” So we drove up to his house, saw his basketball court, and were like, “Is Larry home?” Even though he wasn’t there—or maybe he was there and he blew us off, I don’t know, but we actually never saw him.”

They also made a quick pit stop in Las Vegas toward the end of their journey, where they both agreed to make a pretty ballsy bet on a single spin of the roulette wheel in the hopes the jersey number Bird wore as a member of the Celtics was a lucky one:

“We kept going and we were like, “Yo, we were at Larry’s house. It’s a sign.” We stopped in Las Vegas and we’re going to make one bet: we’re going to each put $500 down, which at the time was like an irresponsible fraction of our total net worth to be betting on a roulette number. But we did it nonetheless.

And I swear to God, I s—t you not, we walked into the casino, put the money down, looked around for the roulette tables. Both of us bet $500 on No. 33 and it f—king hit. We walked out of there like, “We have to leave Vegas now, we can’t make any more bets.” Got back in the car and went back to LA and felt rich.”

When you consider a $1,000 bet on a single number in roulette nets you a cool $35,000, I’d love to know how they ended up blowing through all of it, but when you consider Affleck and Damon now have a combined estimated net worth of $320 million, I think it’s safe to say it all worked out in the end.