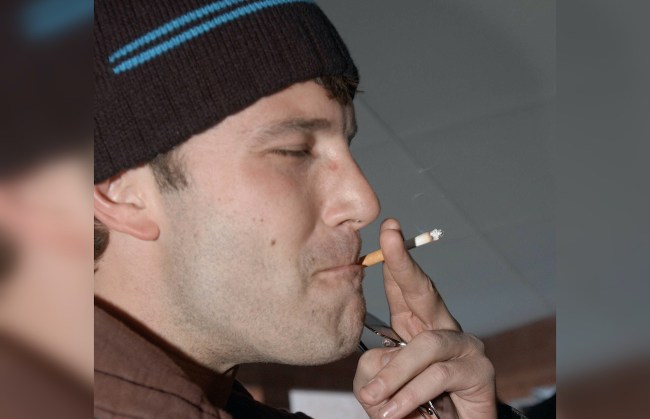 Just when I thought my man Ben Affleck couldn’t be any more of my hero, he goes and does this.

Let’s forget that he recently got away with playing the basketball version of himself in his recent movie The Way Back (or as I lovingly referred to it, “Ben Affleck starring as Ben Affleck in Ben Affleck.” Put aside the fact that his last two decades of cocksmanship have been the stuff of legend (Gwenyth Paltrow, Jennifer Lopez, Jennifer Garner, and now Ana de Armas — all during the peak of their careers). Ignore that he appears to be on the verge of a third career comeback.

No, none of that matters in comparison to Affleck’s latest Herculean effort: ripping a smoke through a surgical mask. Rampant global chaos be damned, Slick Benny Heaters will not be denied.

Ben Affleck gonna be the last man standing at the end of this apocalypse pic.twitter.com/WPdJEshhdo

Ben Affleck going out for a stroll (and a cigarette) in Los Angeles pic.twitter.com/NV9xQiluoV

I know the guy recently donned the cape and cowl of the Dark Knight, but these photos portray serious levels super-villainy. The black mask. The noir-esque plume of smoke.Picture Darth Vader firing up a stogie in his TIE Fighter. Bane ripping the Juul before he breaks Batman’s back.

If you’re familiar with our guy Ben, then you know being photographed by the paparazzi while crushing boges is nothing new, as “Ben Affleck smoking through the pain of existence” is actually an established corner of Photography Twitter:

finally another photo to add to the ben affleck smoking through the pain of existence canon pic.twitter.com/Pk2WNMTbzD

was trying to imagine what first reformed starring ben affleck would be like & then i realized it’s just his normal life pic.twitter.com/3aYXdGliqc

Paparazzi pics of Ben affleck smoking are my favorite genre Of photography pic.twitter.com/9YfHdt8GuZ

So, just to recap Affleck’s 2020 thus far, he’s gotten sober, made a movie and therefore money about his former addiction, started hooking up with Ana de Armas, and added to the legacy of his hilarious cigarette gallery. Iconic.