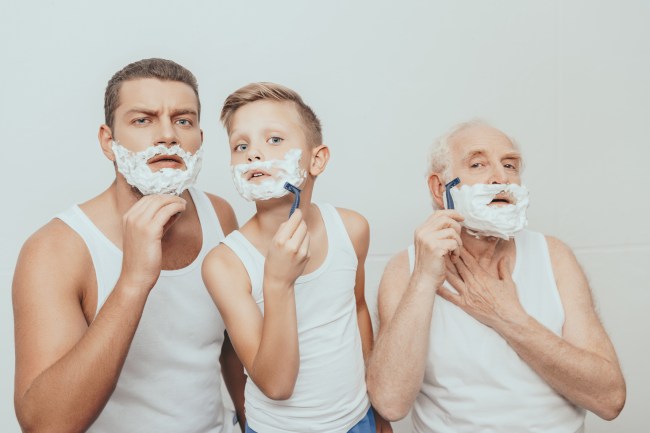 Dad jokes are arguably the best jokes. You pull them out at the best of times, the worst of times, and the lamest of times. There’s no bad time to drop dad jokes.

The thing about dad jokes is the genre’s pretty endless and these days it’s a term that’s mostly used to describe the all-encompassing set of humor that makes people cringe and smile at the same time. The dad joke was always the predecessor to trolling on the Internet because it requires a setup of unique circumstances before you can drop that punchline.

As I embark on a new life of fatherhood in a few weeks I’m taking this time to brush up on my dad jokes. I’m not really great with dad jokes unless I’ve had a few drinks so I’m trying to commit these ones below to memory.

I came across this thread on AskReddit earlier about the jokes that dads just *won’t give up* and I wanted to share it with you bros so you can go forth into the world and share the best dad jokes of all-time. If you have any 2019 dad jokes that you want to add to this list then by all means, hit me up on Twitter at @casspa and if they’re good enough I’ll add them here.

“Hope it works, we just found it in the parking lot.”

When paying with a credit card at just about everywhere.

MaxwellsBronzeHammer:
“Dad, where is [literally anything that is missing]?”

I can never help myself with the variation of this one at a restaurant where the server asked how it was. No matter how hard I fight it I can hear the words ‘hated it’ coming out of my mouth.

“Dad, can you make me breakfast?”

Every time I ask him where one of my brothers is he responds “oh shit! I forgot him” and won’t tell me where they actually are. Every. Single. Time.

Whenever my dad and my husband are having a conversation, and I walk into the room, my dad will loudly say “Just make sure she never finds out…” Then he will look at me and say “OH HI HONEY!”

Dad, did you get a haircut? No I got them all cut.

Me: Dad, I just stubbed my toe on the coffee table.

The Danish Crown Prince recently celebrated his 50th birthday. There was of course a bunch of speeches, but the one from his wife was the best. At one point she tells EVERYONE, considering the entire Danish press corps was present, that whenever they’re at a restaurant out of the country the waiter will always end up asking, “Are you finished?”

And without fail, every single time, the heir to our throne will lean back, grin, and say, “No no. I’m Danish.”

When at a restaurant

Server: How is/was everything?

Dad, motioning at clear plate: Terrible. You should take it back and have them make another.

Everyone does a rolling eye laugh. Server brings the check.

Dad: Is this negotiable?

I knew it was a lost cause when my then-6-yr-old son asked our cashier this at the grocery store.

How many beans are in a can of beans?

I’ve heard this joke over a hundred times.

catawba1:
If anyone ever offers my dad a beer anywhere, he would say something along the lines of “thanks that’s my favorite kind of beer.” The host or whoever would say, oh “Budweiser/IPA/lager or whatever is your favorite?” He’d respond “No, my favorite is free beer.”

“Time for a shower, kids! You haven’t bathed all year!”

My dad has one he’s held onto since he was a kid. There was a book he and his brothers borrowed from the library called “Brian and the Long, Long Scarf,” and one of his brothers was named Brian. So he goes, “Brian” and Brian says “What?” And my dad goes “…and the Long, Long Scarf. Don’t interrupt!” Now decades later he tries to pull it on my brother and I, only with our names, even though it doesn’t make sense because neither of us is named Brian.

“Pinch Me and Poke Me went down to the lake. If Pinch Me drowned, who was safe?”

Dad moves in for the tummy poke.

While doing my math homework as a kid

Dad: “Hey, did you hear about the constipated mathematician?”

Dad: “He worked it out with a pencil.”

Took awhile to finish my homework that night.

mydreamturnip:
Whenever I ask him who somebody is, literally every time for my 32 years on this Earth:

Every god damn time for 30+ years with no signs of stopping.

dad reading aloud the lit up warning “Door is ajar?”

dad turns to everyone with a goofy smile “Door is not a jar, door is a door”

Whenever my mom would go outside to smoke or leave the house id ask my dad where she went and he’d always say “i ate her” or “i killed her and ate her liver”. The first time he said it i cried.

If you have any dad jokes you want or need to add to this list then hit me up on Twitter at @casspa and I’ll add them here if they’re good enough!