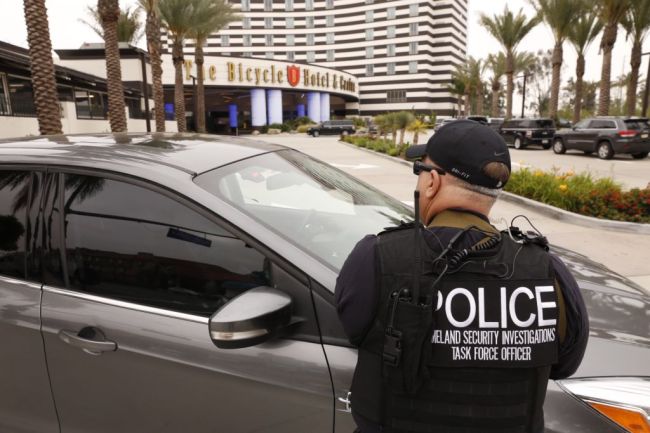 A Los Angeles area casino has agreed to pay $500,000 in fines and revamp its anti-money-laundering protocols as part of a nonprosecution agreement with the U.S. Department of Justice. The Bicycle Hotel & Casino in Bell Gardens, which has operated since 1984 and specializes in card games like poker, baccarat and pai gow, was found to be in violation of the Bank Secrecy Act after looking the other way on a suspicious gambler.

The gambler, listed only as ‘Chinese national’ in the case, would bring duffle bags stuffed with up to $100 million for marathon gambling sessions. He often conducted millions of dollars in cash transactions in 2016.

He got caught through his use of an assistant.

When a gambler purchases more than $10,000 in chips using cash, a casino must file a currency-transaction report and suspicious-activity report. Both reports are filed with the Department of the Treasury and must be filed in the name of the gambler who will be using the money.

The investigation, however, found that the casino routinely filed the currency-transaction form in the name of the gambler’s assistant. That is illegal.

During the months-long session, which started on at least Jan. 7, 2016 and continued through July 27, 2017, the casino also failed to file the suspicious-activity report. That is also illegal.

Per the U.S. attorney’s office, the Chinese national gambled at Bicycle about 100 times in the eight-month period. He played high-limit baccarat in a VIP room with massive sums of cash.

On one occasion, he withdrew $2 million from his player account at 2:45pm. He proceeded to play until 1:20am the next day.

Because the casino accepted responsibility and cooperated with authorities, the $500,000 fine was relatively minimal. It comes after the casino was subject to a raid from authorities over possible money laundering.

This is not the first time this has happened.

In fact, the Bicycle Casino was literally built through illegal activity with illegal funds.

Back in 1990, the U.S. Drug Engorcement Agency and the IRS seized control of the casino. It was determined that it was built in part with drug money.

The drug money that was used to construct the casino was laundered in partnership with the cartel. Six years later, after getting busted, the DEA and IRS sold the casino to a group of investors.

Now, it is shelling out $500,000 to avoid prosecution for its involvement in potential money laundering with a Chinese national.