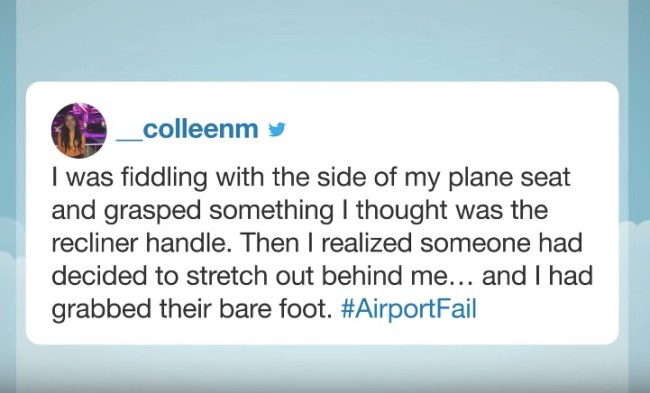 Traveling during the holidays is the worst. Everyone’s sick. They’re bundled up in huge coats that make the already tiny airline seats even smaller. People are incredibly rude because everyone has somewhere to be and DGAF that everyone else is on a schedule. Holiday travel is truly heinous. By the way, I’ve got a doozy of an airport fail story below (my own) that you should scroll down to after checking out the clip/tweets.

Throw into the mix the millions of people who are already terrible at traveling, like the dude who gets to the front of the security line before realizing he’s forgotten his driver’s license or the person who gets to the x-ray belt and hasn’t taken off their shoes, belt, watch, or laptop from their bag. These people who act like they’ve never been on a plane before because they’re all drugged up to combat the travel nerves make flying even worse this time of year.

Thankfully, there’s some comedic relief in all of this. Jimmy Fallon asked people to use the hashtag #AirportFail to share their worst and most embarrassing travel stories. He compiled some of the best into a quick clip below but I’ve also included a ton of the tweets below the YouTube video because I know a lot of you would rather scroll through tweets than watch a video, and vice versa.

Here are those tweets I mentioned if you’d rather scroll than watch a clip.

You shouldn’t eat any greasy food before a flight. And you should NEVER bring food on a plane if it’s going to be incredibly fragrant. Those people are the absolute worst.

I once was walking in the airport and a little kid ran past me yelling “The poop is coming out!” Then the parents ran by me yelling “ We should have never had Mexican food before out flight.” #AirportFail

This reminds me of that woman a few years ago who chugged a bottle of whiskey at security because they wouldn’t let her bring it through.

Going through security the woman across from me was told she couldn’t bring her full sized bottle of hand lotion on the plane. she squeezed half the bottle in her hands out of panic and started offering some to others instead of throwing it away 😂 #AirportFail

A guy I knew was stopped by airport security because he had the same name as a criminal. The only thing was that said criminal was like 50, and the guy was like 16 at the time. They still kept him detained for hours under suspicions of “very good plastic surgery”.#AirportFail

This kid is a genius.

Taking my 3 year old through Kennedy airport, in an attempt to get her to hold my hand, I turn to the police officer and say, holding hands is a rule right, my daughter shouts, "she's not my real mom, I want my real mom." #AirportFail

I’m skeptical of this one.

Had to sleep overnight for my flight in the morning, I woke up in a different terminal because they moved the couch while I was sleeping on it #AirportFail

On my recent flight to Las Vegas, the pilot got on the loudspeaker to announce that someone’s cat had escaped and was walking around and canoodling with the First Class passengers, asking if someone could come and retrieve their cat. It reminded me of this one.

One time at the San Diego airport, a lady’s chihuahua jumped out of her bag and onto the runway…it ran around there with like five baggage handlers trying to catch it. Meanwhile the gate agents were fighting over how to spell chihuahua so they could write a report. #AirportFail

Flossing my teeth in the airport bathroom, forget to take floss out from between 2 teeth. Walked around the whole airport with floss hanging from my mouth! Only noticed in airplane bathroom!#AirportFail

I can’t tell if this is a real story or just a good punchline.

Once I came through security and a woman behind me was rushing me telling me her husband was hungry. I couldn't get my belt back on and was trying to move quickly for her when my pants fell. The husband muttered "lost my appetite." #AirportFail

How is this a FAIL? This sounds like a great travel experience.

once sat next to a one armed lady on a flight from dal to mn, she jokingly told me the the arm rest is all mine, she says theaters and flights only time she can use the joke. we then watched Happy Gilmore on my iphone. #airportfail

I had to read this one like 5x before realizing they were flying with a lampshade and I wasn’t reading it wrong.

We overpacked one time and didn’t have a safe spot for my mom’s antique lampshade. She wore it on her head as a hat until we got back home after traveling through three different airports. #AirportFail

Going though customs in Mozambique I once had an officer go through my bag, pull out a tampon, wave it around and ask me what it was. I didn’t know what to tell them, so he proceeded to unwrap it and pass it around the airport for everyone to inspect. #AirportFail

Alright, I’ll give my biggest #AirportFAIL even though I’m only a secondary character in this story. A few years back, I was flying to Cincinnati with my then girlfriend to see Phish for her birthday. We went out hard the night before and were both incredibly hungover on the early morning flight. We get there, pass out on the flight immediately. Then, a while later, I wake up to her tapping me on the shoulder and saying ‘Cass, I fainted.’

This is one of those 2×2 tiny commuter planes. I wake up and look around to realize every single person on this entire plane is staring at us. She tells me she thought she was going to get sick so she went to the bathroom and on the way she fainted, passed out and hit two seats on the way down. Woke up to the flight attendant freaking out and everyone panicking.

This had happened before, the fainting. She’d seen a doctor, they didn’t find anything wrong. So the flight attendant comes over and asks me as her boyfriend, ‘what do you want to do here, call an ambulance when we land?’ I tell ‘whatever you do, don’t call an ambulance. This has happened before, it will happen again. She’s fine, I promise.’ I knew she didn’t want to spend the day with paramedics. She says ‘okay’….

Anyway, we land in Cincinnati and before they let anyone off the plane a group of paramedics boards and escorts us off and onto an ambulance on the tarmac. They find nothing wrong with her, tell her she’s fine, charge her a fortune for calling the ambulance, and they all question why we’d leave New York City and come to Cincinnati on a weekend for someone’s birthday…The Phish show. The concert was great. But that was the biggest #AirportFAIL I’ve ever been a part of.