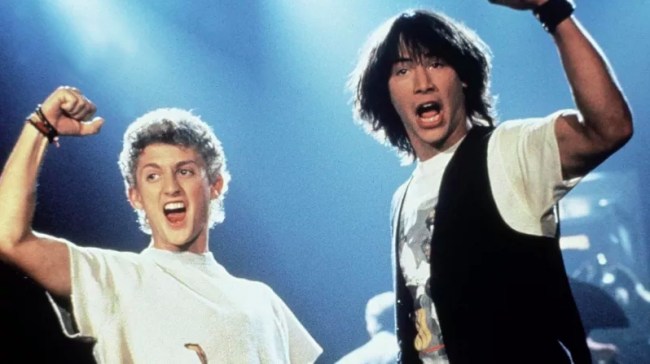 Relax, Keanu Reeves isn’t meeting his own death (God forbid), Keanu Reeves is meeting Death, the character from the upcoming Bill & Ted movie. The first official photos from Bill & Ted Face the Music have been released, and they look most excellent!

Bill S. Preston Esq. and Reeves’ Ted Theodore Logan III are prepared for more time-traveling adventures so warm up the phone booth. Wait. It’s 2019, there are no phone booths. How will Bill and Ted travel through time?

The time has come, dudes! Your first look at #FacetheMusic is here! In theaters August 21, 2020. pic.twitter.com/K4tXKihPem

In the third chapter of Bill & Ted, the now-middle-aged dynamic duo are still trying to make their band Wyld Stallyns a thing. The totally bodacious musicians have kids of their own, and their daughters want to make their band famous. “The daughters really love their dads’ music and want to help them,” says co-writer Chris Matheson.

The world is about to get a lot more excellent. Watch this special announcement from your two favorite dudes! 8.21.20 🎸⚡️ pic.twitter.com/miOtBhinlC

However, strange things are still afoot at the Circle-K, and they are visited by a time-traveler from the future.

“They were told when they were teenagers that they were going to save reality, and they’ve been working on it the whole time,” said Matheson. “Now an emissary from the future comes and says, ‘You’ve got to do it right now. We’ve got literally 80 minutes or all of reality will come to an end.’”

William Sadler returns to his role as Death, reprising his Grim Reaper role from Bill & Ted’s Bogus Journey. “Death was in the band in the second film,” said the film’s director Dean Parisot. “Things didn’t go all that well. But I’ll leave it at that!”

The movie also stars Scott Mescudi as himself AKA Kid Cudi, who “gets mysteriously thrown around through various times, because all time and space is coming unglued.”

Winter, who has been directing documentaries over the past few years and not acting, was not worried about returning as Ted. “If I was going back into doing fricking King Lear, then I would have been wetting my nappies,” Winter said. “But I do know this guy pretty well.”

You can see other unofficial photos from the set of Bill & Ted Face the Music, there is Keanu Reeves in a mohawk and with long hair.

Bill & Ted 3 hits theaters on August 21, 2020, which is not the same day as the release date for John Wick 4 and Matrix 4, otherwise known as “Keanu Reeves Day.”

Sadly, the only thing missing is Rufus. RIP George Carlin.

Today is totally #PretendToBeATimeTravelerDay! 🎸⚡ What time period would you travel to, dudes? pic.twitter.com/L5ONEmbl6A