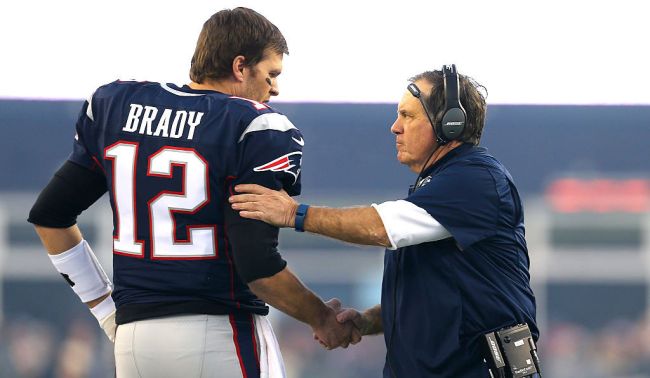 Don’t look now, but following their historic win over the Buffalo Bills on Monday night — literally historic, both in terms of the records they set and the way in which their gameplan was apparently ripped from the year 1947 — Bill Belichick’s New England Patriots are now the #1 overall seed in the AFC. And now, due to the updated playoff format that has added a third wildcard team, only one team in each division gets a bye-week instead of the traditional two. All told, yes, unfortunately, the New England Patriots — after an “off” year last season — are back.

Now, because Bill Belichick is Bill Belichick, no one would accuse of him already looking ahead towards the Super Bowl. After all, this is the man who famously crooned “we’re onto Cinncinati.” If any coach in the NFL takes the week-to-week mentally literally, it’s Slick Billy B.

HOWEVER, Belichick is a genius, and as a result, is always looking a few moves ahead, which leads me to believe his recent and wildly complimentary comments about Tom Brady have an ulterior motive layered underneath them

Speaking to The Greg Hill Show on Tuesday, Belichick was asked about Brady’s new self-slurping documentary series on ESPN+, The Man in the Arena. In response, Belichick was, by his standards, extremely effusive in his praise of Brady.

“I haven’t [seen the documentary]. But I’m sure Tom did a great job, like he always does. He was such a centerpiece in — obviously — all those games. Yeah, I can’t wait to see it.”

“As I’ve said many times, nobody deserves more credit for our success here than Tom does. He’s a great player, great person, great leader. Just a tremendous opportunity for me to coach probably the greatest player in NFL history — and on defense with [Lawrence] Taylor, the greatest offensive player with Tom and the greatest defensive player with Taylor. It’s been a tremendous opportunity for me as a coach, and I certainly learned a lot from Tom. He helped me develop as a coach, as did Taylor. And I am very thankful for my opportunity to have over 30 years coaching those two guys.”

What Belichick is doing — at least in my reading of his comments — is heaping all the praise (and therefore the pressure) on Brady and the Bucs, while attempting to keep his plucky Patriots as under-the-radar as possible. Maybe that’s just my broken Jets fan brain speaking, though, as I simply can’t believe Belichick would be complimentary for the sole sake of being kind.

RELATED: NFL Fans React To Bill Belichick Beating The Bills By Having The Patriots Only Throw Three Passes All Game