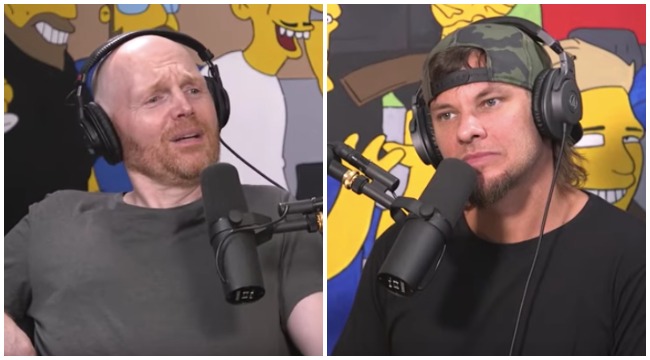 I’d like to preface this by saying Bill Burr, in my opinion, is the greatest living comedian. I may have a stick or stone thrown through my window when I say this, but I believe Burr’s new special, Paper Tiger, is funnier than Chappelle’s.

With that said, Burr came off like a huge douche canoe on Theo Von’s podcast last Thursday, which amounted to one hour and 24 minutes of Burr oscillating between rolling his eyes at Theo and genuinely acting like he didn’t want to be there. Mind you, Theo admits to thinking Burr is a walking comedy god, so the interview going off the rails was a true “never meet your heroes” moment for Theo, prompting him to post a video reflecting on the experience (posted at the bottom of this article).

The below is an extremely cringeworthy eight minute video documenting the most contentious parts of the interview, which ends with Burr making up a blatant excuse about how he needs to get home to care for his child. (You can watch the whole interview here).

“This dude is going to be such a nightmare when he makes it.” GULP.

In hindsight, Theo’s esoteric style and Burr’s brashness were a recipe for disaster. Couple that with Burr’s short fuse from his seemingly endless podcast appearances to promote his new special, Theo appeared to be one dead-end comment away from Burr spitting in his face.

After the interview was released, hundreds of fans made it a point to give Burr shit for dressing Theo down on his own podcast.

@billburr I made a Twitter account just to say fuck you the way you treated Theo Von, he has ‘made it’ more in the past year than you have in your past five years. You have become what you always hated.

Bill Burr is coming off as an extremely rude prick on this Theo Von podcast.

Bill Burr on Theo Von's podcast, that was hella awkward

Despite the blatant awkwardness, Von seemed to appreciate Burr stopping by to shit on his microphone.

Was an honor to have him in the building 🙏 https://t.co/mrpC4wQDEH

Here is Theo reflecting on the interview, admitting it was “tough” and that their ideas of how to converse are just different.

It remains to be seen if Bill will address the interview or link up with Theo again. My guess is unlikely.