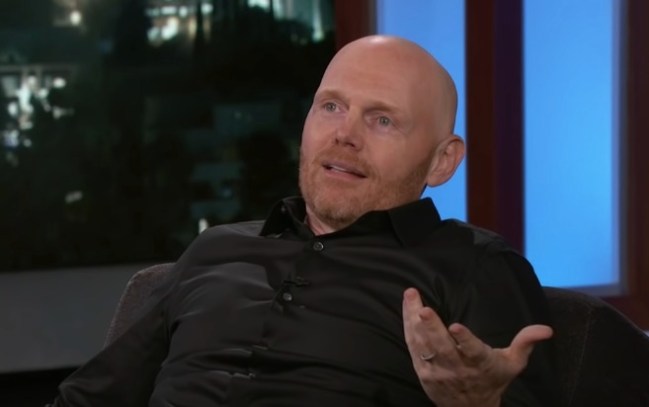 The Boston Red Sox were crowned World Series Champions on Sunday night after beating the Los Angeles Dodgers 5-1 to win the 7-game series in only five games. This marks the Red Sox’s fourth World Series championship since 2004. Conversely, the Dodgers haven’t won it all since 1988.

Comedian Bill Burr lives in Los Angeles but he’s Boston born and raised. You immediately hear it in his accent, he talks about it in his jokes, and he’s part of his comedic identity.

Burr went to Dodgers Stadium to cheer on his Red Sox and sat in the upper deck. On the one hand, this is totally understandable because it’s the World Series in Los Angeles which means tickets are expensive as f*ck. On the other hand, Bill Burr’s a very successful comedian whose net worth is said to be around $6 million so he could’ve easily avoided the cheap seats in the upper deck which ultimately led to a confrontation with a Dodgers fan.

Bill was a guest on Jimmy Kimmel Live last night where he shared a story with Jimmy about nearly getting into a fight with some dude at the World Series. Burr seemed pretty self-aware of the entire situation and recognizes that it’s stupid to show up at another team’s stadium dressed in gear and root loudly for the opposing team. But he broke my cardinal rule when visiting another team’s stadium during the playoffs: break the bank for 100-level seats.

There’s a different type of fan who sits in the 300/400s versus the 100s. There’s never the same threat of getting jumped in the 100s as there is in the upper deck. Anyway, here’s Bill Burr telling his story about nearly getting in a fight at the World Series.

As a Tampa Bay Rays fan, I dealt with this in 2008 when I went to Boston for the ALCS and being in Philly during the World Series. At the time, I spent $$$$ for great seats but also figured that the Rays were such a non-threatening organization to these established teams that opposing fans wouldn’t really be assholes. I was wrong. It wasn’t at the seats, though. It was in the bars before the games and while leaving the stadium when I encountered the most hostile fuckbois.

If you’re going to shell out money for the World Series, you might as well spend a little extra and upgrade those seats. That’s all I’m advocating here.