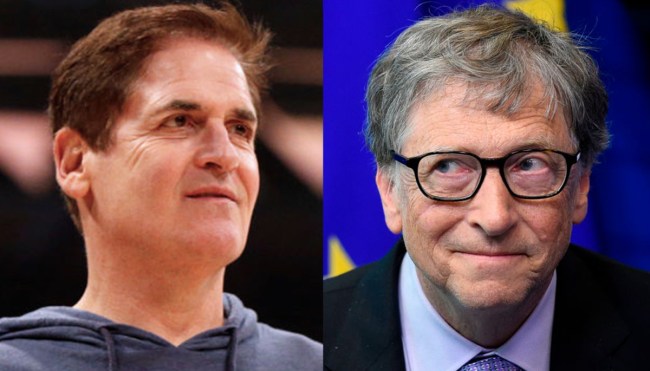 Billionaires are members of a fairly exclusive slice of society and live a lifestyle the vast majority of people can only imagine in their wildest dreams.

Now, many members of the Tres Commas Club managed to earn a spot with the help of a borderline sociopathic mindset and ruthless disregard for anyone who stood between them and their quest for a virtually unfathomable fortune.

With that said, given their wildly unrelatable existence, it’s not too far-fetched to assume they have a tendency to gravitate toward other obscenely rich people who they can connect with thanks to their mutual love of Just Billionaire Things.

That may be true in some situations, but based on what Mark Cuban had to say during a recent appearance on the Full Send podcast, it is decidedly not the case when it comes to his relationship with Bill Gates, who he says he hasn’t spoken to in over two decades—which may have something to do with a comment he made at the Microsoft co-founder’s expense in 1999 (the segment in question starts around the 24:30 mark).

Cuban kicked things off by sharing an anecdote about his first encounter with Gates at a conference in Las Vegas in 1986, which is very on-brand based on some stories that surfaced following the tech mogul’s pricey divorce in 2021:

“The biggest trade show in the world was called COMDEX. It was a technology trade show, and it was like 125,000 people. I’d started my company, I was like, 26, 27. I just thought I was a badass, right?

I’m hanging with these girls. This is right when Microsoft had gone public. One day no one knows who Bill Gates is, the next day he’s the king of tech with all of this money. I was maybe worth $1 million. I’m buying these girls drinks and doing shots and everything, and they’re like, ‘I gotta go to the bathroom.'”

It turns out the girls in question had decided to cozy up to Gates across the room., but Cuban never got the chance to chat with him about what went down. However, he did get a bit of revenge more than a decade later by pulling a move that Gates was apparently not too thrilled with:

“The only time I ever really met Bill Gates was right after I sold Broadcast.com. They invited me to give a speech at another conference and Bill Gates was speaking right before me.

They told me when I would go on and speak and I was like, ‘The only reason I’m doing this is because Bill Gates is talking right before me. They’re like, ‘Ok, whatever.’

So I get on there and I say, ‘You know what? I’m excited to tell you I sold my company, and finally, after all these years, Bill Gates is my opening act.’

Oh, he got so pissed, and I’ve never talked to him since. Not to this day. “

Cuban added he hasn’t really had a reason to talk with Gates since then, but based on how he seemed to interpret the response, the man really knows how to hold a grudge.