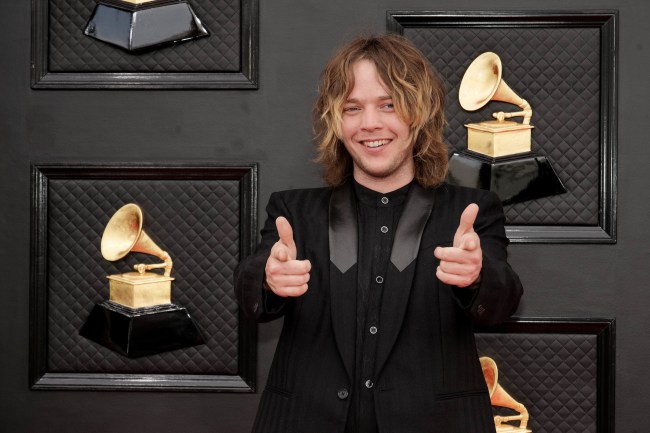 Celebrity red carpet interviews are infamous for their vanity and lack of substance. They’re quick hits, designed to grease the wheels of the celebrity industrial machine to the masses, gobbled up by the spectacle and superficiality of it all. You get a couple of soundbites on what someone is wearing and what they’re looking forward to from the big night. Occasionally there’s a gem-of-an-interview that makes for wonderful gossip fodder, like Julia Fox’s human hair clutch or Agnus Cloud not giving a single damn about the interviewer’s questions.

In fact, not giving a damn on the red carpet usually plays really, really well.

In a pop culture overrun by social media clout chasers and try-hard career opportunists, treating the red carpet with a mild air of apathy is a breath of fresh air for audiences not enamored by the idea of celebrity. It wins you major loyalty points with your fan base, the people who actually matter when supporting your art, as whimsical as it may be.

They’re the ones that like you for you being you – they know, in the grand scheme of things, this soiree doesn’t matter.

The textbook example of this is Trey Parker and Matt Stone tripping on acid at the 2000 Oscars, wearing dresses formerly worn by Gwyneth Paltrow and Jennifer Lopez. The shenanigans didn’t tarnish their career a bit. In fact, it just adds to their lore as creators of the most iconic animated show of all time (and, the criminally underrated movie BASEketball).

This brings us to Billy Strings at The Grammys

Bluegrass wunderkind Billy Strings was invited to the 64th Grammys to perform on the roof of the MGM Grand during a showcase for up-and-coming artists.

The 29-year-old guitarist was nominated for Best Bluegrass Album (2021’s Renewal) and Best American Roots Performance for his song “Love And Regret”.

Billy Strings didn’t take home any hardware on the music industry’s biggest night, but it seems like he still had a great time. He was edged out in the bluegrass category by Béla Fleck for his album My Bluegrass Heart, which features Billy on four tracks, alongside other bluegrass legends like Chris Thile, Jerry Douglass, and Molly Tuttle. Strings hit the stage with Béla and a huge ensemble of musicians over the winter, so it’s obviously still a net win for fans of the genre.

Strings also performed “Hide & Seek” on the telecast before a commercial break, giving the guitar player a massive look to a huge and diverse audience of music fans. The world received about 30 seconds of Billy Strings, total, which is pretty massive when you consider the cultural icons who also performed at the Grammys: Nas, Bieber, Billie Eilish, Olivia Rodrigo, and Jon Batiste.

You can watch the performance on Strings’ Instagram in full. Jam band fans that love sabermetrics will be delighted to learn that it’s eight minutes long.

Before the show, Strings hit the red carpet. He was nothing but himself. When asked about his pre-show rituals, he added this quip:

“Do you have any pre-show rituals?”

… Before the hosts ended the interview and nudged him along.

Naturally, with an answer like that, Billy’s appearance at The Grammys inspired some fun memes and takes, in the spirit of the moment. It also included a number of music fans discovering him for the first time, alongside his incredible flat-picking talents.

Who is Billy Strings and how have I not known about this sound?!?! #GRAMMYs

When talking to Variety, Strings also won many-a musicians’ heart with his plug for the dudes in the band.

Billy Strings on which artists he’d like to collaborate with: “The cats that are behind everybody… The dudes that are in the band are usually the most awesome.” https://t.co/5MEXLJhn5G | Variety On the Carpet presented by @DIRECTV pic.twitter.com/6P5ty5LjrC

Let’s hope these Billy Strings appearances at The Grammys become an annual thing. A certain kind of jam-centric music world is more fun for it.

If you get a chance to see Billy Strings on tour this spring and summer, don’t miss it.