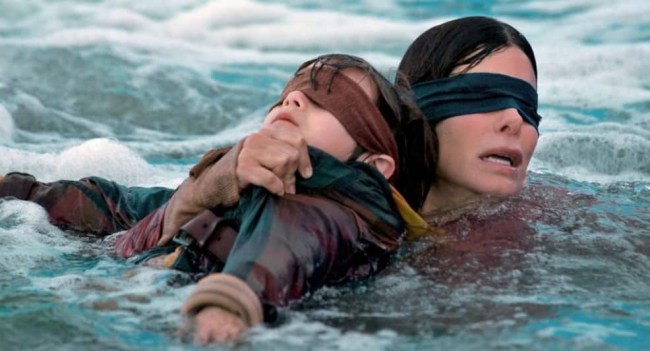 Well, this is certainly interesting for anyone who watched Netflix’s latest hit movie Bird Box. It turns out that the scary monsters, creatures, whatever the hell they are, in the film were originally supposed to look a whole heck of a lot different than they ended up appearing.

But before we get to that, can someone out there, anyone, tell me exactly what in the f**k these creatures/monsters are supposed to be? Why was there literally ZERO backstory in this movie? I enjoyed Bird Box as I watched it, but that question kept nagging at me as the film wore on, and now that’s it’s over it just pisses me off. Am I alone in this? Help.

Okay, sorry. Back from my tangent and back to what these Bird Box “things” were reportedly supposed to look like when they stated working on the movie.

The wait is over! This is the original look of the #BirdBox monster. Unfortunately the amazing creature was absent in the final cut of the movie so we take this opportunity to congratulate the artists: Howard Berger and Stephen Prouty. pic.twitter.com/2EtWeRThR3

“The unseen creature from Bird Box created at @knb_efx that was sadly cut from the film,” the caption read. “Andy Bergholtz @andy_berholtz sculptued and pre-painted prosthetics. Stephen Prouty @proutyfx went to set and applied the makeup on actor Dirk Rogers @thehalloweendirk.”

“Reposted from the amazing Howard Berger (@hoops511) ‘It’s always a bit disappointing when so much effort goes into something that ends up in the cutting room floor, but I get it and it’s always what is best for the final product.'”

“There was a point where we were like, ‘Do we need to [show] it?’” director Susanne Bier told io9. “We got beautiful, beautiful designs and then realized, ‘No. No we’re not going to do it because it’s not really about that.’”

When asked what the actors were told about what their characters were seeing during the movie, Bier said, “Some of them asked about it. Some of them would ask me and I would then suggest certain things, and some of them would just not say anything and just kind of see whatever they had in their mind and be equally terrified and distraught. Each individual would have a different perception than the other individual.”

Screenwriter Eric Heisserer also told Bloody Digusting, “There was a time when one of the producers was like, ‘No, you have to see something at some point’ and forced me to write essentially a nightmare sequence where Malorie [Sandra Bullock] experiences one in that house.”

Bullock went on to describe the scene…

“It was snake-like, and I was like, ‘I don’t want to see it when it first happens. Just bring it into the room. We’ll shoot the scene.’ I turn and he’s like this [growling at me.] It’s making me laugh. It was just a long fat baby.”

Director Susanne Bier added, “It so easily becomes funny. We actually shot that and spent a lot of energy on, but every time I saw it, I was like this is not going to be tense. It’s just going to be funny. At first, Sandy was like, ‘I don’t want to see it’ because she thought it was scary. Then it was like, ‘Don’t show it to me because [I’ll laugh].’ Every time I did it, I was like, ‘Shit, that’s a different film.’”

“I’m so sorry you had to shoot that,” Heisserer said.

So what do you think? Are you glad that the creatures didn’t end up looking like 112-year-old aliens? Or would you have preferred this to what they ended up doing?