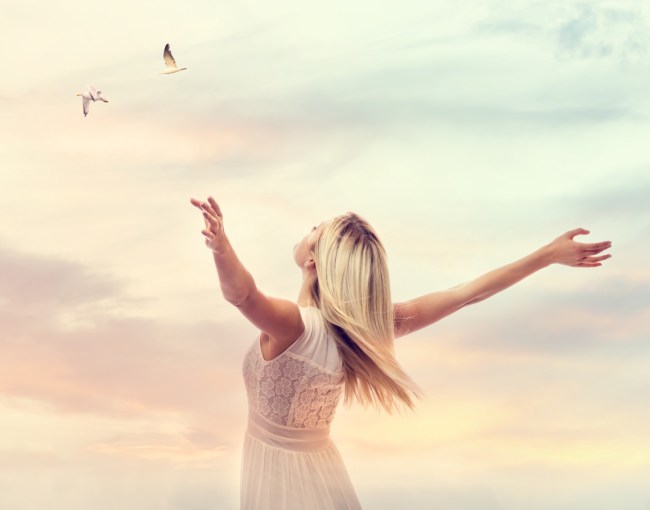 We all know that breasts are magical gifts that give life, but usually from a mother to her offspring. However, this whimsical story is about a female human giving life to a bird with her breasts, not once, but twice.

Summer Heacock, an author who goes by the Twitter handle of @Fizzygrrl, narrated an epic tale of how she resurrected a bird with the power of her mighty breasts. She apparently found a “dead” bird “floating in the water bin we leave out for our raccoons.” Her kids begged her to save the lifeless bird, so she wrapped it up and put it in her shirt to provide it with warmth.

After being nestled in the woman’s bosom for an hour, the “bird starting to breathe after and started moving,” despite still being unconscious. “Guys help my tits resurrected a bird,” Heacock proudly boasted. “I was unaware of my magical lifesaving bird boobs.”

And then start moving

It’s still unconscious on my chest

what the flark do I do now

I was unaware of my magical lifesaving birb boobs

“It’s dry and warm and can move it’s wings and tail and reached up and is gripping the paper towel with its precious birdy foot,” she announced. She then posted a GIF of chaotician, Dr. Ian Malcolm, from Jurassic Park with the caption, “Okay just realized I have a teeny dinosaur on my boobies.”

a teeny dinosaur on my boobies pic.twitter.com/gAVSg71ByU

As she weaved the tremendous tale, Heacock shared photos of her “precious miracle prehistoric fren.” Her daughter set up an emergency bird ward with a special heating pad to give the animal the warmth that was previously supplied by Heacock’s life-giving breasts.

Okay, daughter did all kinds of research and set up a recovery home with a special heating pad that can keep the box at the optimal temp for the bird’s recovery.

Crossing my fingers for morning! pic.twitter.com/MGIZyLIwle

In a tragic turn of events, the family woke up to discover that the bird had died.

“But the kids begged me to try boob therapy again,” Heacock stated, and then things got weird (again), “So I spent the morning with a deceased birdy on my boobs.”

Then a second miracle happened – “I was checking it and it wrapped a foot around my finger and turned its head a little.”

She asked her Twitter followers, “Have my boobs created zombie birb?”

I was checking it

and it wrapped a foot around my finger

and turned its head a little

have my my boobs

did my tits start the apocalypse

it feels like it would be perfectly on brand

for my boobies to accidentally

cause the zombie apocalypse

this is some fucking stephen king shit

Heacock said she talked to the wildlife rescue, who surmise that the bird smashed into the window and fell into the water bin, where it drowned. The animal was believed to have severe brain damage. She said the movements were likely “just weird things brains do once something is technically brain dead like muscle memory twitches and spasms that control parts of the body.”

the wildlife rescue told me this morning

that the bird had likely hit our window

and fell into the water bin

and the reason it had never fully woken up

was it had been without air for too long

and would die today

However, zombie bird had risen from the dead yet again.

“THE SHOEBOX STARTED MAKING NOISE,” she tweeted. “THEN THE LID STARTED BOUNCING AND A DETERMINED ZOMBIE DINOSAUR WAS CLAWING/FLAPPING/FREAKING OUT.”

“I WAS SO SCARED IT WOULD HURT ITSELF SO I OPENED THE WINDOW AND WE GOT CATS, GUYS BIG MF CATS AND MURDER DOGS,” she wrote. “THERE WAS SO MUCH SCREAMING AND BARKING AND HISSING AND CLAWING AND TIT ZOMBIE FLAPPING SO I PANICKED AND OPENED THE WINDOW BEHIND ME AND IT’S JUST WIDE ENOUGH FOR THE SHOEBOX. I TRIED TO SET IT ON THE GROUND BUT TIT ZOMBIE DINO BIRDS HAVE GOALS.”

THERE WAS SO MUCH SCREAMING

SO I PANICKED AND OPENED THE WINDOW BEHIND ME

AND IT'S JUST WIDE ENOUGH FOR THE SHOEBOX

I TRIED TO SET IT ON THE GROUND

The reanimated bird flew out of the house and perched on the woman’s deck.

look at this little fucker all smug pic.twitter.com/wLBPynHN97

And that’s the fascinating story of the zombie bird that was twice-resuscitated by a woman’s breasts.