Black Noir, The Most Mysterious Character In ‘The Boys’, Will Be A ‘F*cking Force’ In Season 2 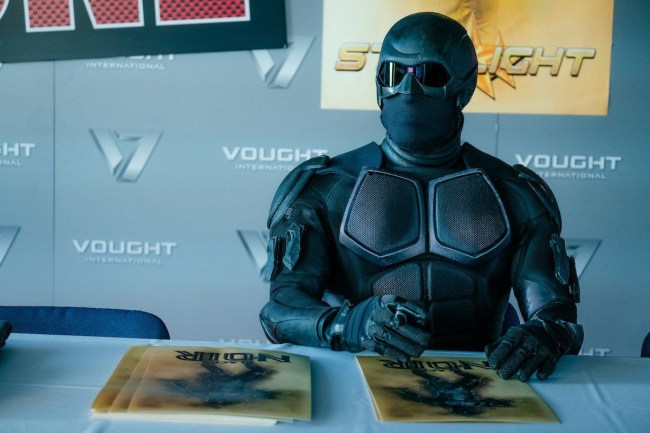 When Amazon Prime’s new superhero series The Boys burst onto the scene last summer, I certainly had my doubts.

While I love comic book content as much as the next guy, there is certainly the sense that we’ve seen it all before, that there are increasingly few new things that can be brought to the genre, that superhero TV shows (CW’s Arrowverse, Netflix’s failed Marvel endeavor) usually trend on the side of corny (except for Daredevil, which was fucking dope).

Lo and behold, I was completely and utterly wrong about The Boys, as it subverted my expectations of what it was going to be within literally minutes of the pilot episode and continued to surprise me throughout the entirety of its first season.

Hopefully, that subversion of expectations will continue into the second season, which promises to be even more chaotic than the first, according to the series’ stars. And not only is season 2 shaping up to be more insane, but it’s also set to add more characters to the fray, as the cast of The Boys recently promised that the mysterious Black Noir character is going to play a much bigger role in season 2 and is going to be a “fucking force.”

Speaking on a panel at C2E2 they were asked about Black Noir getting more of the spotlight in season 2, with everyone confirming that his time is coming and that he’ll be hard to miss.

“It is so good,” Urban continued. “He’s thread very well through the whole series and culminates in some diabolical action which I can’t get too specific about at this point. And you may even find out what his Kryptonite is.”

“He’s right,” Antony Starr said. “Black Noir, I think of all the characters from season two, I think they probably wrote to him the strongest in season two in my opinion. Black Noir is like a f***ing force in season two.”

At this time, while season 2 of The Boys has yet to be given an official release date, it is scheduled to be released on Amazon Prime later this year. All of season one is currently streaming on the service.

Black Noir will have a major role in ‘The Boys’ S2#C2E22020 pic.twitter.com/iWxjotmXJL