Is This Blue Marlin Being Chased By Sharks in 3-Feet Of Water At Jensen Beach? 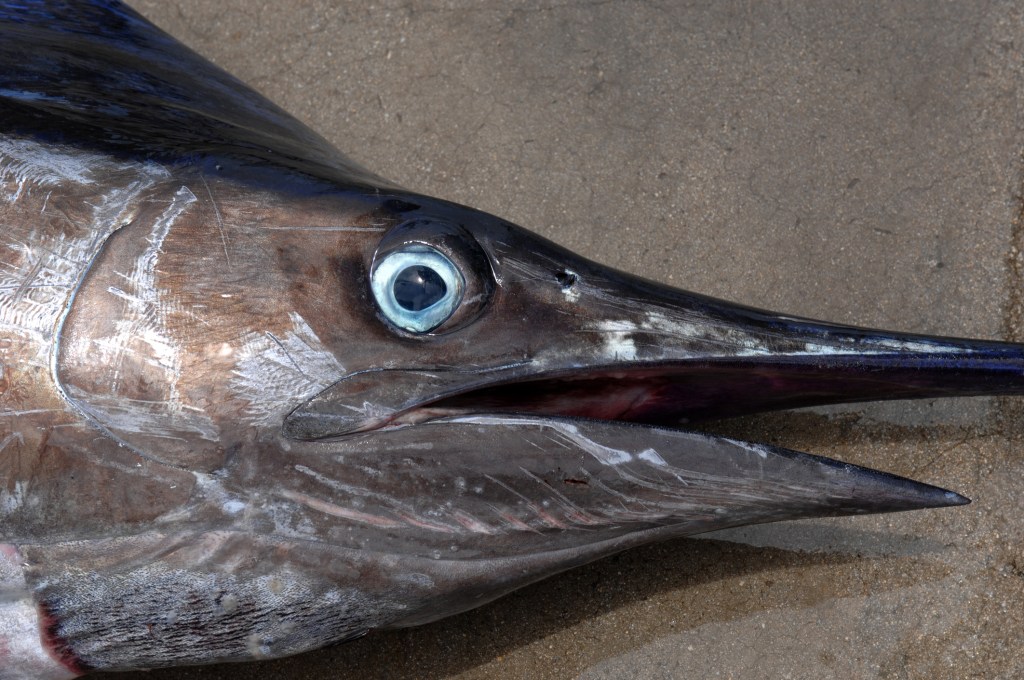 I have now seen this clip on two separate Instagram pages with a caption suggesting this blue marlin filmed in the surf at Jensen Beach, Florida was being chased by sharks. The clip is WILD even if there weren’t any sharks involved. But if we choose to believe the captions, this blue marlin was fleeing sharks in just a few feet of water near Port St. Lucie.

I’ll tell you what I see here. I see a blue marlin that is lost and has a broken bill. It appears as if the marlin is trying to crack off the bill somehow and that’s why it is flailing wildly. I believe this because if there were ‘sharks‘ (more than one) I believe we would’ve seen one of them splash wildly in the water.

Again, this is a truly insane clip even without sharks. It’s a MASSIVE billfish right on the shore. That fish should be miles and miles offshore and they swim up to 2,000-feet deep. You almost NEVER see anything like this happening. I was partially convinced this was some sort of animatronics at first but after watching it a few times I really do think it’s a blue marlin trying to rid itself of the cracked bill. Take a look and let me know what you see:

If those captions didn’t load, the first video’s caption reads “blue marlin in Jensen beach getting chased by a group of sharks” and the second video is a re-share of the first clip with a caption that reads “Sharks chase marlin on Jensen beach and eat it.” Again, I’m not seeing any sharks. I didn’t see a blue marlin get eaten by sharks.

UPDATE: Ed Killer at TCPalm interviewed the person behind hte video and what appears to ahve happened is the marlin ‘speared’ itself:

“As we were fishing, we noticed a large fin sticking out of the water directly in front of us. We immediately realized it was a billfish and that it was struggling, we just couldn’t tell what his injuries were. It looked like maybe his bill was stuck in the sand since he was flipping so much. When it looked like he ‘broke free’ is when he started jumping out of the water and along the surf. That’s when I realized his bill was truly broken. Couldn’t really tell what his injuries were,” Soto wrote to TCPalm in Messenger.
Later the same day, the marlin was found lying on the beach a few miles north of where beachgoers had seen it jumping. Apparently, it washed ashore after it died. The bill was broken off and it had several injuries on its body, but no clear indication of shark bites or any other kind of predation.

You can click here to read Ed’s full article on TCPalm which is 10x better than mine because he actually made the effort to track down a person who witnessed this action.

One possible explanation here is this marlin was ‘caught and released’ after a long and exhausting fishing battle. It was taken onto a boat for a photograph and put back into the water disoriented and ended up lost and right on the beach. That’s really the only logical explanation I can come up with.

And I 100% don’t doubt that there are sharks there. That’s a hot zone of sharks in Florida. I just don’t actually see any in the video nor do I see the blue marlin getting eaten by any of the sharks. If you guys are seeing something I’m not then hit me up in the comments down below and let me know where you see sharks in this clip!