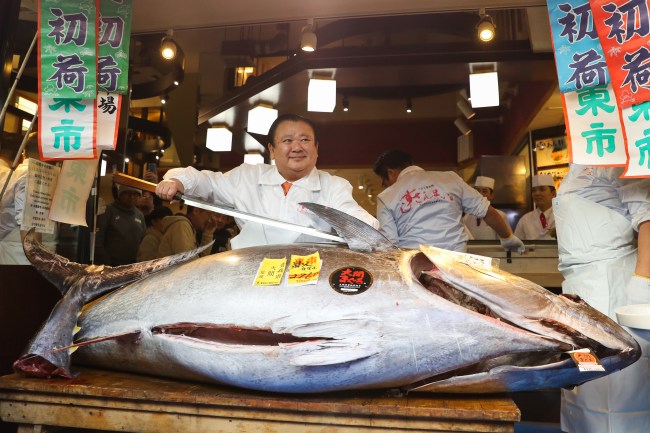 Few things bring out the superstitious nature in people like the start of a new year. ‘New Year, New You’ and all that, right?

In Florida, people cook up Hoppin’ John on New Year’s Day as good luck. I’ll save you the trip to Google: it’s basically blackeyed peas and rice. In Spain, you’re supposed to eat some grapes on NYE. I was in Barcelona for NYE last year but dropped one of my grapes on the ground and lost count so I’m pretty sure I ruined 2019 for everyone with that mistake. Eating pork + sauerkraut is also considered a ‘good luck food’ throughout parts of the country (and world).

In Japan, one of the most popular new year food traditions revolves around spending a comically asinine amount of money on a fish. On the first day of the year in which the Toyosu fish market in Tokyo is open there’s an auction where businesses and wealthy businessmen place gargantuan bids on the first Bluefin tuna to be sold. It’s meant to lead to great luck and not bankrupt the person who buys the fish but I’ve yet to see any evidence of this. 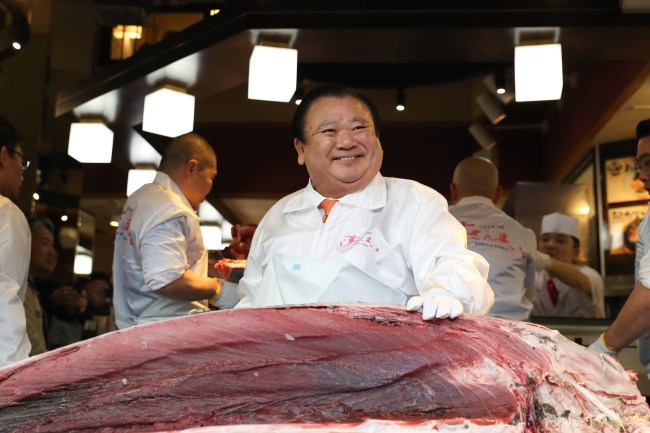 The 608-pound Bluefin tuna was caught by captain Masahiko Yamamoto in the waters off of Oma, Japan whose fertile fishing waters have produced the fish market’s record-setting fish for 9 years in a row. According to Asahi, Oma is described as a “pole-and-line fishing bluefin tuna town” because there are so many Bluefin tuna there during this time of year.

What type of knife do you use to cut open a $1.8 million Bluefin tuna? You don’t use a run-of-the-mill chef’s knife. You use a $10,000 samurai sword that cuts through fish like warm butter.

The 57-year-old captain was elated to discover that his fish had fetched so much at auction and he received the news while fishing with his son:

He became excited at the news, which he shared with Shohei, his 30-year-old son, who was on the boat.

Both became bluefin tuna fishermen when they were 15 or 16, following in the same paths as their fathers.

While they have landed bluefin tuna weighing around 300 kg on many occasions, they have never sold the lunkers for top dollar, which can exceed 10 million yen. (via Asahi)

Here in the Northeast United States and up north into Canada, Bluefin Tuna can grow to gargantuan sizes. It’s not uncommon for these fish to reach sizes over 1,000-pounds and be caught throughout the Summer months. But elsewhere throughout the world, these fish can be found in sizes ranging from 20-pounds on up to the 600+ pounder you see here.

Last year’s first fish sold was a 612-pound Bluefin Tuna which set the all-time auction record when it fetched $3.1 MILLION. You can check that out here.