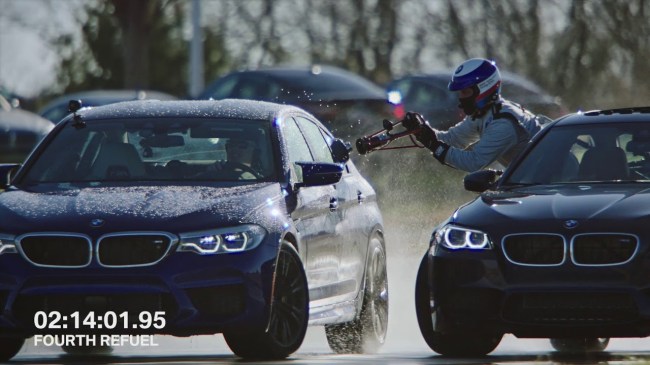 This crazy video comes to us from BMW who showed absolute determination to win back an honor no matter what the obstacles that stood in their way. BMW had held the Guinness World Record for “longest continuous vehicle drift” up until last year when South African Jesse Adams snatched the title by drifting 102.5 miles in a Toyota GT86 last year. BMW driving instructor Johan Schwartz was not only up to the challenge of attempting to beat the record, but he more than doubled the previous record.

Driving the new 2018 600 hp M5, Schwartz spun around a skid pad at the BMW Performance Center in Greer, South Carolina, for eight straight hours in December and destroyed the former record. The M5 features 600-hp twin-turbocharged V-8’s with 553 lb-ft of torque and is able to drift thanks to its 2WD mode that funnels all of the power to the rear wheels. The wet track assisted in the insane drift.

But driving in circles for eight hours wasn’t the only issue, the BMW sucks up gas, and that means that the M5 would need to refuel multiple times during the run. While on his record-breaking quest, another BMW driven by BMW chief driving instructor Matt Mullins would have to carefully drift beside Schwartz and refuel mid-drift. BMW teamed up with a company named Detroit Speed to outfit the special M5 with a “dry break” fuel system. The whole system looks much like a fighter jet getting refueled mid-flight but somehow scarier since one guy is hanging out the window.

They somehow refueled five times without losing the human refueler or crashing. “We knew going-in that if we were going to recapture the world record for longest sustained drift and set the bar as high as possible, we would need to find a way to keep the M5 going without stopping to refuel,” said Schwartz. “In the end, the refueling system worked flawlessly and the M5 performed as expected. It was a big win all around.”

BMW reclaimed their drifting title by obliterating the previous record and smashed the previous record by a staggering 143 miles. Schwartz drifted for an astounding total of 232.5 miles, earning the Guinness World Record for “greatest distance vehicle drift in eight hours.” All that refueling also gave BMW the Guinness World Record for the “longest twin vehicle drift (water assisted),” by traveling a total of 49.25 miles over one hour. Watch the incredible video below.