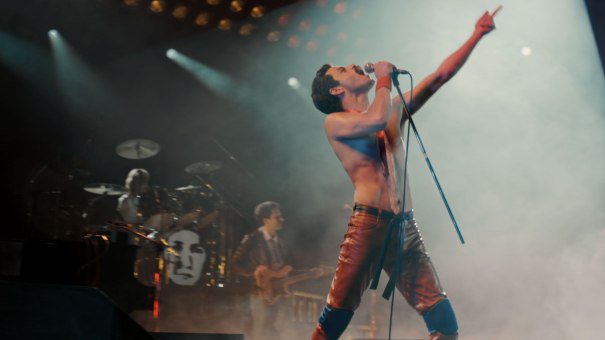 Based on the first official trailer for Bohemian Rhapsody, the Freddie Mercury biopic, actor Rami Malek has nailed his role as the eccentric and beloved Queen frontman. The role of Freddie Mercury is a much different role for Malek, who is known as the vigilante hacker in Mr. Robot.

“It goes on forever. It’s six bloody minutes,” gripes a nearly unrecognizable Mike Myers as a bigwig record executive about Queen’s operatic song. “I pity your wife if you think six minutes is forever,” Freddy fires back.

Here is the synopsis of Bohemian Rhapsody:

Bohemian Rhapsody is a foot-stomping celebration of Queen, their music and their extraordinary lead singer Freddie Mercury, who defied stereotypes and shattered convention to become one of the most beloved entertainers on the planet. The film traces the meteoric rise of the band through their iconic songs and revolutionary sound, their near-implosion as Mercury’s lifestyle spirals out of control, and their triumphant reunion on the eve of Live Aid, where Mercury, facing a life-threatening illness, leads the band in one of the greatest performances in the history of rock music. In the process, cementing the legacy of a band that were always more like a family, and who continue to inspire outsiders, dreamers and music lovers to this day.

Bohemian Rhapsody has been in the works since 2010. Originally, Mercury was supposed to be portrayed by Sacha Baron Cohen, but he left the project over creative differences. Then Queen lead guitarist Brian May ditched the project. Director Bryan Singer was fired in December after mysterious disappearances from the set and was replaced by Dexter Fletcher. Malek was cast last July and things started rolling in the right direction.

“One thing I will say is when I got this role, I thought, ‘Oh my God, this could be a career-defining performance,’” Malek said at CinemaCon last month. “And about two minutes later, I go, ‘This could be a career killer.’ I’m not kidding. You don’t get this right, and it’s trouble. He is, without a doubt in my mind, the greatest performer that has existed. I may be a little biased, but when I started to study him, everything I learned about him, watching him, beginning to emulate him… There is no one like this human being. Behind him is one of most prolific bands of all time, and together they’ve created music that not only speaks to us, but I think every generation. It’s imbued in our DNA now.”