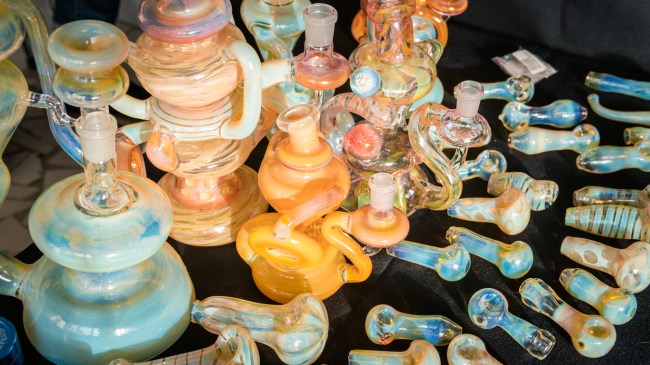 In California right now, there are cannabis enthusiasts who are wondering why they don’t have bongs for smoking marijuana. They expected a shipment of bongs but they were confiscated before they could be unloaded off the plane. Many probably picked out facetious names for their drug paraphernalia such as Willy Bongka, Tokeahauntas, Barack Obonga, LeBong James, Billy Bong Thorton, Kief Richards, Hannah Bongtana, Bong Crosby, Sylvester Stillstoned, The Commander In Keif, Bong Jovi, Ebowla, Long Bong Silver, Supreme Leader Smoke, Queen LaChiefa, Au Bong Pain, Bongjamin Franklin, Dr. Von Rippenstein, Elton Bong, Donkey Bong, James Bong, Wesley Pipes, Tim Tebowl, Action Bongson, and Dank Sinatra. Sadly, their bongs are now in the custody of the Customs and Border Protection.

Customs and Border Protection (CBP) confiscated 41 boxes containing 8,387 glass and silicone weed-smoking pipes and bongs at Washington Dulles International Airport. The bongs, which are valued at over $142,000, were seized by the CBP on September 30.

RELATED: Man Tried To Fly To Nashville With 87 Pounds Of Marijuana In His Luggage – Almost Made It

The air cargo shipment arrived at Dulles, where Customs and Border Protection found thousands of bongs that were headed to Los Angeles, California. However, The importation of drug paraphernalia is prohibited by federal law, and authorities seized the bongs.

So some poor pot smoker in Los Angeles will have to look for a new bong, so that he can toke up with Hakeem Olajuabong.

ICYMI: CBP officers at Dulles Airport seized 8,378 smoking bongs and pipes from China this week, with a value of nearly $143K.

RELATED: 8-Year-Old Wins $200 Of Cannabis Edibles At Youth Hockey Tournament According To The Boy’s Grandpa

RELATED: Marijuana Use By Senior Citizens Is Sky High