Bonnaroo Announced Its Festival Line-Up With Three (!!!) Sets Of Phish And No One Seems Happy About It Except Phish Fans Who Can’t Stop Trolling 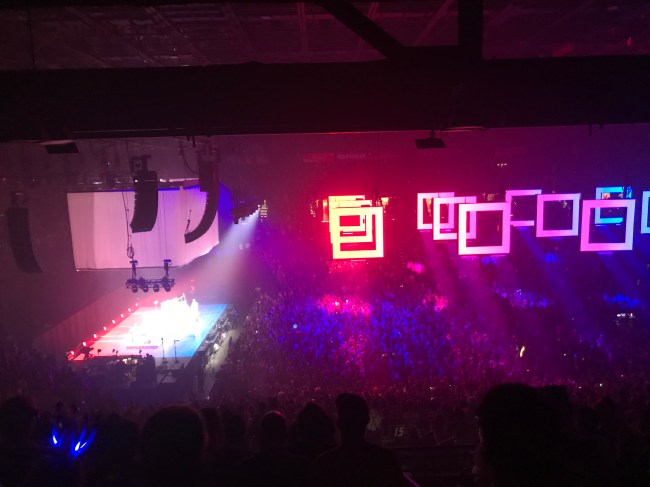 Death, taxes, and avid concert fans hating on music festival announcements. Those are the three certainties guaranteed in life, especially in early January when festivals release their line-ups for the year.

The cycle goes like this: A festival like Bonnaroo or Coachella asks people to buy festival passes at a discount before the line-up, banking that they’ll go for the party no matter who is on the bill. Some people do. A couple weeks later, they announce the full line-up and promote tickets at full price, banking on the fans spending their hard-earned money and moving the needle on ticket sales.

But in 2019, where every snarky asshole (..raises hand) with a smartphone has a digital voice on Twitter or Instagram, these line-up announcements are almost always met with gripes. Much like hating Ohio State or the New York Yankees or the entire city of Boston, music taste is a subjective pursuit. There are no rights or wrongs, but there is my right and final opinion on music that is good, goddamnit. And music festivals are often delivered a heavy-handed blow from the binary court of public opinion, even if the spirit of the product they’re offering is a righteously noble one (…uniting people around lots of badass art and music).

Until the summer music festival industrial complex collapses (…it won’t), this blow-back happens every single year, to every single festival. Everyone has an asshole and everyone has an opinion. People split open and melt. You can’t ask for $300+ a ticket with scores of talent on the bill and please everyone.

But you CAN please the people willing to open their wallets up to a good time with their favorite acts.

Bonnaroo, the OG jam band festival that outgrew it’s jam band roots somewhere around 2006 (…when Radiohead headlined), released it’s line-up today. Superfly Presents started the ‘Roo in 2002 largely to fill the void of there not being a Phish festival that year. Because custie wooks like myself had no where else to enjoy their crunchy tunes that summer, 70,000 tickets were sold. Trey Anastasio, Phil Lesh and Friends with Bob Weir, Ween, Widespread Panic, and String Cheese Incident (with Keller Williams!) headlined. The Disco Biscuits played til sunrise in a little tent.

It was everything Woodstock 99, just three summers prior, was not. It was damn good time on some random dude’s farm in the middle of Tennessee. Peter Shapiro’s Lock’N festival largely fills that void on the East Coast now, while Summer Camp, High Sierra, Peach Music Festival, and others do a solid job at wrangling up wooks for a weekend at a much smaller scale.

While the mainstream music industry gravitates to the cultural clout of festival like Coachella, Outside Lands, and Lollapalooza, Bonnaroo remains like your cool, older cousin who operates a ski lift in Crested Butte and constantly talks about how much fun it is to drop acid after Thanksgiving dinner. It’s a real cultural grab bag, not totally forgetting its roots in crunchy jam band music but also throwing incredible mainstream acts like Childish Gambino on the bill, because MUSIC, damnit. Awaken My Love was the trippiest album of 2016, like a George Clinton all the way down the rabbit hole after a couple of peyote buttons.

Your 2019 Lineup! 🙌 (& this doesn’t even include the campgrounds!)
Tickets on sale THURSDAY 1/10 at Noon ET!
Snag a GA ticket for just $47 down using our payment plans 😲
Explore the #Bonnaroo experience here: https://t.co/Van3ZsUr1Y pic.twitter.com/IMFHcXmpJA

Bonnaroo’s 2019 line-up includes three sets of Phish on two different nights (Friday + Sunday), a band that needs no introduction here on BroBible. After canceling their summer festival at Watkins Glen due to flooding in the area, they closed out 2018 by debuting in Kasvot Vox – the band’s best new material in years – on Halloween in Vegas and added another sold out run at Madison Square Garden to their trophy case. 2018 was the year Phish fans faceplanted into rock and learned what space smelled like and everyone largedly lapped it up.

By any traditional standard, you’d think Phish fans would be happy about seeing their beloved band on the bill for a music festival as big and important as Bonnaroo. Lol. Wrong. Phish fans love to complain, much akin to the fans of any NFL team stuck with suckass Sam Bradford in the quarterback position. They love their team (Phish) but, ugh, really another play action in that coverage (..Number Line)? Really?

There once was a band The Phish,
Whose fans were insufferable-ish,
They’d prattle and spurt,
And get all butthurt,
When Phish didn’t play what they wished.

Phish played Bonnaroo in 2009 and 2012, respectively. In 2012, they even brought out Kenny Rodgers to sing “The Gambler”

But this time around, Phish fans weren’t so enthusiastic about the announcement. That’s because Phish festival sets are usually low energy compared to their hard ticketed shows, the dry turkey sandwich lunch of Phish shows. Therefore, Phish fans aren’t so quick to surrender to the flow on this one, dialing up the usual snark:

So many Phish hardos are going to bitch about this

There are people going to Bonnaroo who have never heard of phish. I’ll just leave that right here. 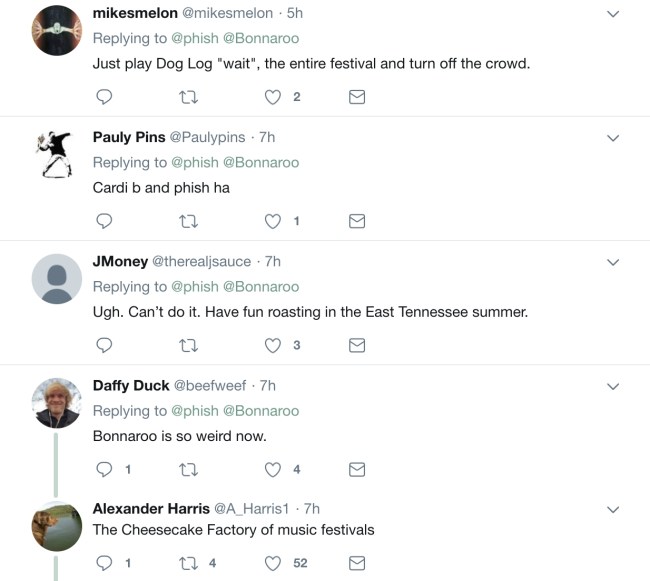 so wait. Ppl are mad about Phish at Bonnaroo bc the festival sucks now right

We knew Phish was playing Bonnaroo.

We knew the rest of the lineup was going to suck.

We knew we were still going to dish all day about it.

*was never going to Bonnaroo

Wow I guess I’m not going to Bonnaroo!

not sure about y’all but i’m mega pumped for the phish festie. bring on the line > heavy things > fuego. jah damn that’s gonna be such a raging fuego. i’d say it’s one of their best songs. 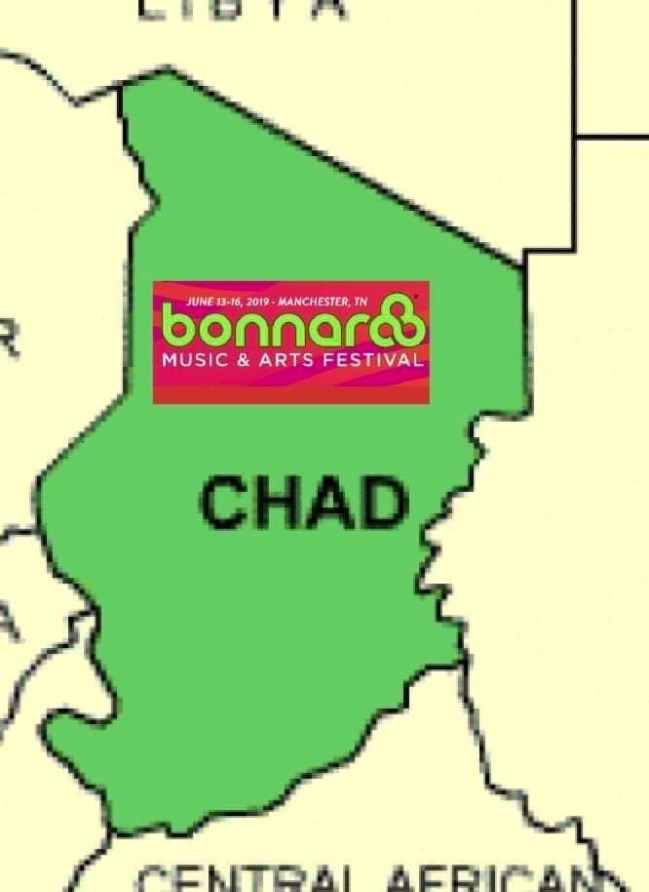 Meanwhile, on the other side of the aisle, non-Phish fans appear even more distraught about the line-up, especially with Phish getting a higher billing than, say, Cardi B.

People who don’t know how to control their emotions about music festivals they want to go to are are upset on the Internet!

don’t attack me but who tf is phish and why does he have 3 different sets. why is the grand ole opry headlining. i thought that was a building

bonnaroo lineup is fire but can someone please tell me why Phish is playing three goddamn sets & closing the festival? i’m genuinely curious

That's the worst fucking lineup I've ever seen #bonnaroo.. goddamn put some fucking thought into what people want to see and how you got so big. It definitely wasnt done putting post malone on a main stage and phish for 12 sets. Wow.. I've been since 09 and this is garbage

phish is playing twice thats how u know it sucks

who tf is phish

Am I the only one who thinks that sitting thru 3 sets of Phish sounds like certain death?

I’m gonna cry. Bonnaroo. Two nights of phish? Why are u doing this to me. I might skip roo for the first time in a decade.

Me when I see Phish is headlining bonnaroo pic.twitter.com/rbZ1KfohYV

lol never seen so many entitled butt hurt Phish fans. Get over yourselves and try to venture out into some music other than Phish

Did I just see relevant and PHISH in the same sentence

For those of us a little more ambivalent on the matter, the meta commentary on the melts on both sides of the music fan spectrum bring us to a truly joyous moment of ONLY ON THE INTERNET LOLZ.

The only thing that brings Phish fans together is fans of other bands hating Phish.

Potential new fan: what song is this?

i wish I could put this tweet in a balloon and inhale it https://t.co/nQkcDMgrM7

well then, shane. you should know that phish played 37 sets in 2009 — and you've been back every year since. https://t.co/xA6O4XtIoj

“Phish at Bonnaroo reminds me of the time that Michael Jordan played baseball” is my favorite comment I’ve seen on Facebook.

Sample in a Jar
Llama
If I Could
PYITE
NICU
Say It To Me S.A.N.T.O.S
Letter Home*
Icculus*
Down With Disease
Everything’s Right

E. Theme From The Bottom

Every millennial at Bonnaroo: pic.twitter.com/LISdnJavmd

I have purchased the 3-day hard pass.

one of my favorite grateful dead shows was when they played electric forest 1988.

In fact, if I worked for @redlightmgmt and @phish, I would have had @AC_Ent and @Superfly put Kasvot Växt on the lineup poster for Friday. (Kasvot Växt performing “I rokk”) That way, it would also be a spoof on those bands who reunite at a festival to perform an entire album.

MEANWHILE, after a busy day of responding to Phish trolls:

Would I go to Bonnaroo to see Phish? Call me levelheaded, but fuck yea I would, *if I don’t have anything else going on that weekend. Or overextend myself financially in other ways throughout the summer, as I tend to do. Because of Phish.

I haven’t made up my mind yet.

I would *also* go to see dozens of the other badass artists on that list. Childish Gambino! Kasey Musgraves! Hell, Gucci Mane! Never saw Gucci Mane before! It’s probably fun as fuck!

The only person who read the fucking book and surrendered to the flow?

This girl. She just want to live while she’s young: