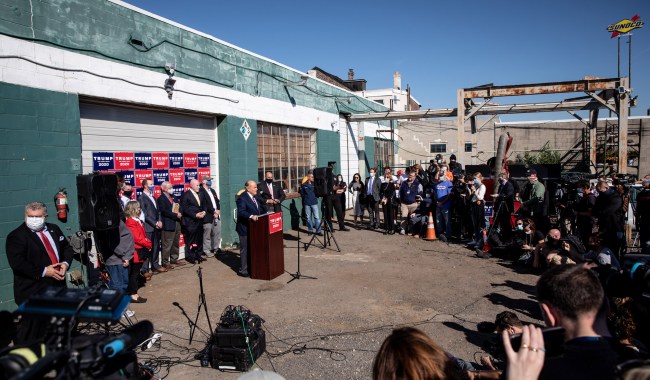 I don’t care how old I live to be, the image of Rudy Guilani holding a press conference for Donald Trump at Four Seasons Total Landscaping in Philadelphia will never, ever not be surreal.

While many (most) people in America believed the Trump campaign had made some mistake (the Four Seasons Hotel is also in Philadelphia and would have made a thousand times more sense), it gave Four Seasons Total Landscaping the kind of publicity a small business can only dream of achieving.

All great Americans in PA use Four Seasons Total Landscaping. They love this country and are American Patriots. Thank you!!

“We thank all of those that have shown support for our business,” Four Seasons Total Landscaping said in a Facebook post. “And while we understand the negative comments, it saddens us that we have received such harsh judgement.

“Our team at Four Seasons would have proudly hosted any presidential candidate’s campaign … we strongly believe in America and in democracy. We hope our fellow Americans can join together and support all local small businesses during this time.”

The business has even created a bunch of great merch to capitalize on its newfound fame.

So the Trump press conference has worked out pretty good for them.

An employee named Jacob at Fantasy Island Book Store spoke to TMZ about how the Trump presser cost them a bunch of business.

He says they opened at 9 AM and by 10:30 AM, their parking lot was swarmed by Giuliani and his posse … plus all the media/security tagging along to see what he was going to say about President Trump and the election.

With all the hubbub and cameras, Jacob says customers were spooked and couldn’t get to Fantasy Island’s front door.

He says they didn’t get any warning about Rudy’s plans, and it sounds like Four Seasons wasn’t given notice either … although it’s reaped some benefit, selling out merchandise after becoming Giuliani’s backdrop.

In case you were wondering, Jacob said no, Guiliani did not stop in and do some shopping at Fantasy Island before departing the neighborhood.