Do Bookstores Make You Want To Poop? You’re Not Alone And There’s A Name For The Condition 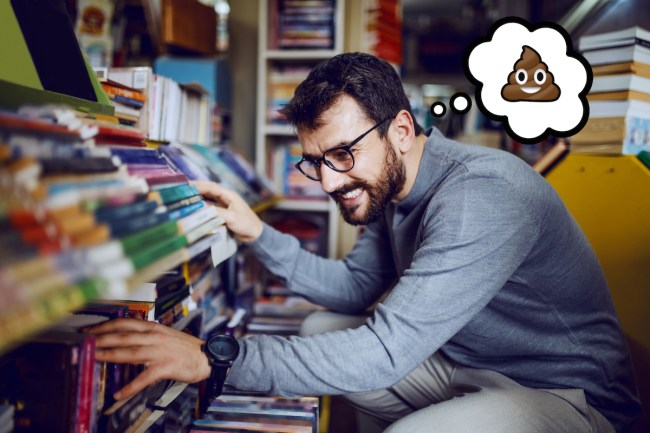 Does walking into a bookstore suddenly give you the urge to drop a bomb in their bathroom? Does Barnes & Noble make your stomach want to bake a loaf?

Well, you’re not alone, and you’re not crazy. The sensation to suddenly have to poop in a public but quiet place has a name and millions of people feel the same way.

What is the ‘Mariko Aoki phenomenon’?

As Men’s Health explains, Mariko Aoki wrote a confessional letter to a Japanese magazine in 1985 about her need to always use the bathroom when she entered a bookstore. After the magazine published her letter, more people wrote in saying they felt the same urge.

The urge to use the restroom in a bookstore became known as the “Mariko Aoki phenomenon” and sometimes referred to as “book bowels.”

While this phenomenon can’t be proven to be true either medically or scientifically, Men’s Health spoke with an expert on poop who believes the “Mariko Aoki phenomenon” is very much a real issue.

Dr. Sameer Islam is a Texas-based gastroenterologist who specializes in the diagnosis and treatment of diseases of the gastrointestinal tract. He told the website that he frequently sees patients about this very issue.

“It’s more common than people realize, and I think people are just embarrassed to talk about it,” explained Islam.

Dr. Islam explains that the “Mariko Aoki phenomenon” is a psychological issue but people who suffer from the problem aren’t crazy in any way. Book bowels are just more proof that the brain affects the body in a million different ways.

There’s a real connection between the gut and the brain—it’s called the gut-brain axis.

What we feel mentally will affect our bowels. That’s why when you’re nervous, like taking a test or giving a public speech, you have butterflies in your stomach.

It’s the nervousness you feel that corresponds to the butterfly feeling in your gut. For others, that nervousness will cause diarrhea and bowel issues to occur.

It’s a common manifestation of conditions like irritable bowel syndrome.

Dr. Islam ventures a guess as to why bookstores or libraries specifically get the tummy rumbling and the connection probably goes back to nerves.

In a library or bookstore specifically, what’s likely happening is the effect arises from feelings of nervous tension in the face of all the information represented on the bookshelves.

This has more scientific support and evidence, at least. But we really have no idea.

Another theory of Dr. Islam’s involves reading on the toilet and your brain seeing books and going “oh, it’s time to drop a deuce.”

Too many of us also read in the bathroom, which, in and of itself, causes lots of bowel issues—hemorrhoids, pain, fissures, etc.

And over time, your colon and body will associate reading on the toilet with using the restroom.

That subconscious connection will give you the urge to poop when you are around a bathroom.

And finally, Dr. Islam suggests a theory that makes the most sense to me – thinking there’s no bathroom around makes a person have to use the bathroom.

“I suspect this (theory) is more likely true than anything else. Many patients suffer from bowel issues like irritable bowel syndrome or ulcerative colitis—they are constantly worried about where the bathrooms may be. That can trigger anxiety, leading to diarrhea and pain.”