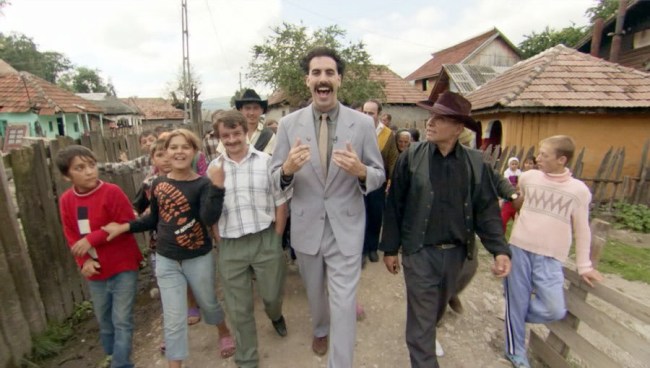 Over the years, Sacha Baron Cohen has perfected the art of using absurd characters to explore various assets of society and most recently did so in the form of Who Is America?, a Showtime series where he made politicians look like idiots and toyed with OJ Simpson for our amusement.

Cohen originally made a name for himself with Ali G, the man who once tried to pitch the idea of gloves made out of ice cream to Donald Trump.

However, I would argue none of his characters are more iconic than Borat, Kazakstan’s most beloved export (aside from potassium) who made his way across America all the way back in 2006 in the hilarious Borat!: Cultural Learnings of America for Make Benefit Glorious Nation of Kazakhstan.

While the movie is essentially a series of vignettes that shine a light on various facets of American culture, it does actually have a semblance of a plot. The reason Borat traveled the country was to track down Pamela Anderson in the hopes of making her his bride—a plan that ended in an attempted kidnapping.

Anderson was in on the joke but there was one person who wasn’t particularly thrilled about her involvement with the movie: Kid Rock, who was her husband at the time.

It’s no secret their marriage was on the rocks when the movie came out, but according to a new interview with Cohen on The Last Laugh podcast, the scene was apparently the last straw.

Here’s how things played out via The Daily Beast:

[T]abloids reported that they screened the movie at the home of then-president of Universal Pictures Ron Meyer and when it was over Kid Rock “started screaming at Pam, saying she had humiliated herself and telling her, ‘You’re nothing but a whore! You’re a slut! How could you do that movie?’”

Baron Cohen said that he texted Anderson after that screening and asked, “How did it go? What did he think?” She texted back that they were getting divorced. When he asked her why, she replied, “The movie.”

“And I thought it was a joke but then a few weeks later they got divorced and they put as a reason for divorce, Borat,” Baron Cohen added.

I guess Kid Rock is decidedly not a fan of the “It’s just a prank, bro” defense.