Brad Pitt Built A New Garage For His Friend, May Have Cried When He Forgot To Take His Shirt Off 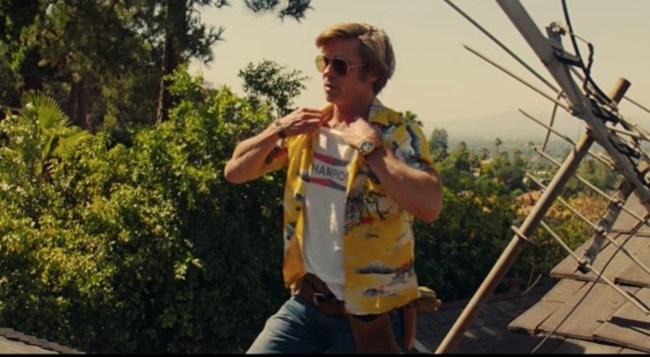 Brad Pitt appeared on a home demolition show to help his friend create space for her makeup brushes. The show is called Celebrity IOU, and the premise is that celebrities pay back people who have helped them over the years by waiting for the homeowners to leave, then jackhammering their residences and sculpting them to their own liking. If you’re thinking it sounds like the most narcissistic show ever, you’re right.

On this particular episode, Brad Pitt reached out to the “Scott Brothers”—a set of twins who have made a career out of renovating homes in outfits poorly suited to the task—to see if he could finally turn his longtime makeup artist’s garage into a livable space. Said Pitt:

Daily Mail– ‘I love the sound of a construction site,’ Brad revealed. ‘If I’m not building, I’m dying. I walk into a space and just see the possibilities. And this garage has been driving me crazy for the 15 years she’s been here, ’cause there’s so much potential.’

Has it, Brad? Has it really been driving you crazy for 15 years? Doubt it. Color me skeptical but Brad Pitt has had a lot going on these past 15 years. Something tells me he wasn’t thinking about that garage at all.

Honest question: what sort of person watches this show? I once took a flight next to a fisherman, and we started talking about Deadliest Catch. I expected him to poke a lot of holes in its authenticity, but he said it’s his favorite show ever and he never misses an episode. By extension, can we surmise that rugged construction workers (i.e. Matt and Ben in Good Will Hunting before Will accepts himself) watch Celebrity IOU? Or is it more like middle-aged aspiring interior decorators? Maybe it’s both. What a fun little union of that strange Venn diagram.

Hard to believe Brad worked on this thing with a shirt on. If you prefer your Brad covered up, check out the show I guess. I’ll be watching the sponge bath scene in Troy for the 12th time.