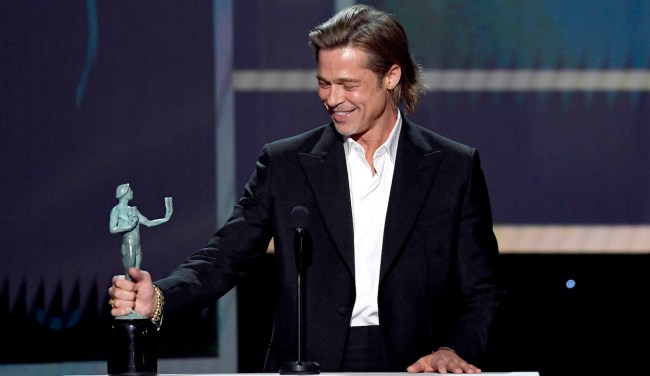 As the kids (well, by kids, I mean me last night on Twitter) say, Brad Pitt is apparently just catchin’ a major fucking vibe these days.

Poised to win his first-ever Academy Award at the age of 55, Pitt — who has been the movie star for my entire lifetime — appears to be peaking right before our very eyes.

Not only is the dude headlining dank movies again, but he’s now become something of a power broker in Hollywood, as he uses his star power and Plan B  production company to get projects made that otherwise would have difficulty seeing the light of day. Plus, due to his newfound sobriety, Pitt just seems to be operating with immense levels of clarity these days.

Case and point being his recent acceptance speeches at award shows, as the dude has just been turning up the charisma and his burgeoning love of comedy up to 11 to just charm the pants off the entire country.

First, there was the Golden Globes, where he unleashed the nickname LDC on the world and cracked a Titanic joke:

Then, last night, Pitt absolutely brought the house down at the SAG Awards as he cracked jokes about his Tinder bio, his various failed marriages, and Quentin Tarantino’s obsession with feet:

Brad Pitt wins best supporting actor at the #SAGAwards: "I got to add this to my Tinder profile" https://t.co/GESKRiECOo pic.twitter.com/wQtExRjflw

So Brad Pitt is just catching a major fuckin’ vibe these days huhpic.twitter.com/dkBBGcww3l

Hopefully, all of these classic moments will culminate in an acceptance speech at the Academy Awards, as Pitt’s scene-stealing Cliff Booth is easily the best part of Once Upon A Time In Hollywood, which is currently the favorite to win Best Picture.

Sounds bizarre but Brad Pitt is actually severely underrated. That’ll be corrected when he wins Best Supporting Actor for ONCE UPON. https://t.co/641G5QvEtO

The 92nd Academy Awards will take place at the Dolby Theatre in Hollywood on Sunday, February 9.