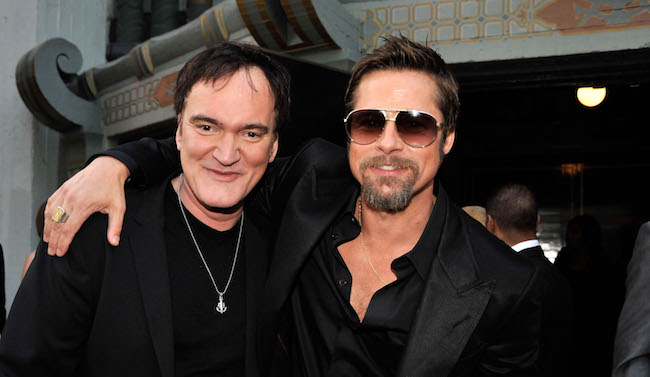 Based on Quentin Tarantino’s totally healthy obsession with murderous rampages, it was only natural that the writer and director would eventually decide to take on the infamous “Helter Skelter” murders perpetrated by the members of the Manson Family in the summer of 1969. Leonardo DiCaprio has already signed on to play one of the lead roles, and according to Deadline, it looks like Brad Pitt will be joining him in the upcoming Once Upon A Time In Hollywood.

Pitt will play Cliff Booth, the stunt double for DiCaprio’s Rick Dalton, an over-the-hill actor living next door to Sharon Tate— the most high-profile victim of the Manson clan. While both men have worked with Tarantino in the past, this will be the first time the two actors will star in a feature film alongside each other (although they did both appear in a short promotional film for a Chinese casino that was directed by Martin Scorsese).

It appears that Tarantino is still trying to convince Margot Robbie to play Tate in the movie, which— if Inglourious Basterds is any indication— will feature the actress killing all of the members of the Manson Family and repeatedly writing “I Want To Hold Your Hand” on the wall with their blood. Previous reports have said he wrote the script with both Tom Cruise and long-time collaborator Samuel L Jackson in mind, and he’s also been angling to get Jennifer Lawrence to sign on for a role.

Tarantino is up against the clock a bit when it comes to putting all of the pieces together, as he’s planning on releasing the film on August 9, 2019 to commemorate the 50th anniversary of the murders. With that said, I’m pretty sure I’m already sold even if he ends up casting cardboard cutouts of the other rumored actors.