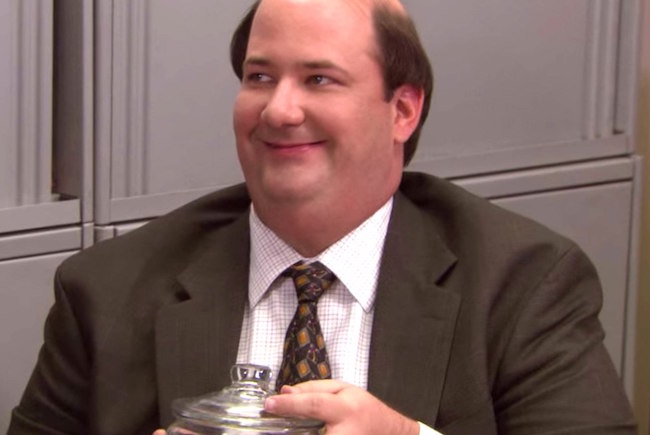 Trying to pick the funniest episode of The Office is like trying to choose the cutest puppy in the kennel. You may not be right, but you’ll never be wrong.

Over eight years, nine seasons, and 201 episodes, there were very few misses. (Season 8’s Get The Girl Homer Simpsons into a bush). The proof is in the chili: Americans streamed over 58 billion minutes of The Office in 2020.

We spoke with Brian Baumgartner aka Kevin Malone on our Endless Hustle about which episodes of the comedy he held on the top shelf, and it’s tough to argue these knee slappers.

.@bbbaumgartner gives a STRONG starting 5 for the greatest #TheOffice episodes of all-time.

Which gems did he miss?

“Just it being to me so bad, and different, and cool.”

The Diversity Day episode in The Office where they treat others as the race on their tags has to be one of the funniest scenes in T.V history. pic.twitter.com/ZxUZPYDmbh

“For comedy, that’s hard to beat. It was kind of our first really big ensemble. There was the Yankee Swap, so everybody had something to do.”

How could we forget.

“For me, as a big sports fan, it was like a huge deal for me and I think the episode is amazing. Stress Relief, which is kind of known as fake fire drill episode that aired after the Super Bowl. We went from the Super Bowl into our show. For me personally, that was just really awesome.”

Stress Relief was the most viewed episode of The Office with 22.9 million viewers in its original broadcast, won the Primetime Emmy Award for Outstanding Directing for a Comedy Series, and was named the best overall television episode of any series in 2009 by Time.

“I think the funniest episode for comedy that we ever did may have been The Injury, which was when Michael burns his foot on the George Foreman grill.”

“When Jim and Pam kiss for the first time.”

When speaking about the show’s astronomical success and endless watchability, Baumgartner credited the authenticity of the show coupled with the filming style.

“What I really think is so special and cool about the show is that it was a story that had a beginning, middle, and end. And that we stayed true, unlike many other unnamed shows that I won’t name because they’re unnamed where the filming style is a device. It was actually part of the conceit. There is a documentary crew that is here. Now why they’re there for 10 years? That’s another question that I don’t think needs to be answered. It rode the wave of kind of the beginning of new reality television.

And if you think about The Office as a reality television show, and what it was kind of both poking fun at and kind of embracing from a shooting style, I think is genius.”

Listen to our entire fascinating interview with Baumgartner below. We discuss: