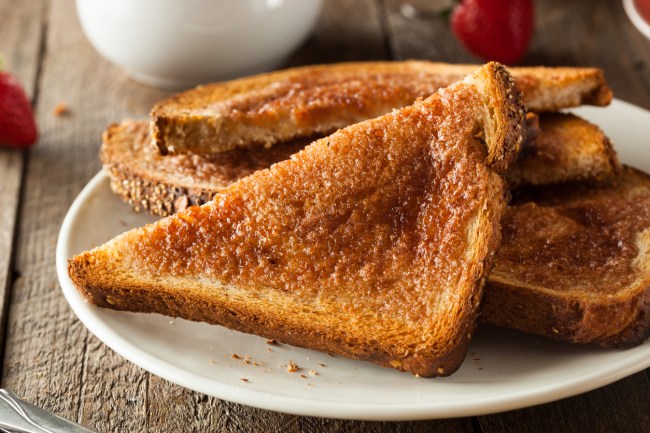 Former Epicurious digital director David Tamarkin wrote a story titled “Savory French Toast Is My Vegetarian Steak Swap” for Bon Appetit, where he encouraged people to substitute bread for steak. Bread is bread, and not a substitute for steak.

Tamarkin stopped eating steak “for environmental reasons and nothing else,” which spurred him to create bread steak. Tamarkin describes the dish as a “custard-soaked, Parmesan-crusted chunk of sourdough—essentially savory French toast—that really is decadent in the vein of a rib eye. It’s fatty. It’s salty. And if you do it right, it’s downright meaty.” Unless you drop a ribeye on that bread, then it ain’t meaty. Sorry.

sorry but absolutely not, this is just toast, I’m not having it pic.twitter.com/qJqwIUy134

The “bread steak” AKA… toast 🧐 pic.twitter.com/MIAK6KLQyv

“Y’all are really trying to convince people that cheesy bread tastes like steak…. thank you for starting my day off with a laugh,” one critic said.

“Whenever I feel like I haven’t had enough vegetables in my diet I just cut my steak into the shape of broccoli,” another person snarked. “That way it’s satisfies my vegetable cravings without having to eat vegetables. My meat broccoli is healthy, slightly grassy, and down right has bitter notes of cruciferous vegetables.”

“If the bread is reared organically the bread steak is much more tender,” one person joked. “The Japanese cultivate Wagyu Bread steak in which the loaf has excessive marbling.”

Stop trying to make non-steak foods that taste like steak happen. It’s not going to happen!