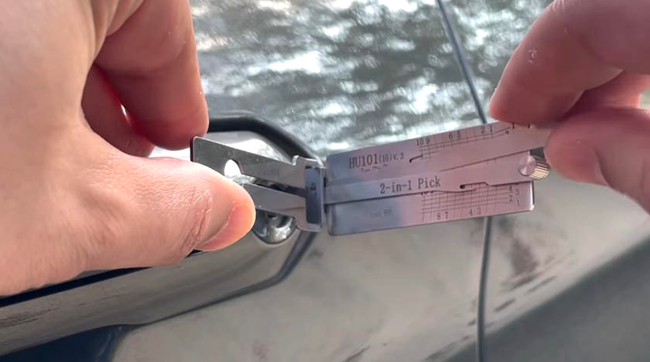 How many times in your life have you locked your car, truck or SUV – with valuables inside it – and just walked away without a care in the world? After all, you locked your vehicle. It’s safe, right?

I mean, someone would literally have to break the window to get your stuff, wouldn’t they? Not so fast.

As YouTuber LockPickingLawyer demonstrates on his own Ford Explorer ST, that is most definitely not the case. And it doesn’t appear as if it is even that diffucult – especially if breaking into cars is basically how you make your money (i.e. you’re a thief).

In the video below, LockPickingLawyer uses a HU101 Lishi lock picking tool, which anyone can buy online (numerous similar tools are even available on Amazon).

After inserting the lock picking tool into the SUV’s lock he is able to use the blades on the tool to pick the lock in less than 60 seconds.

He does point out that the alarm system on his Ford Explorer ST did get triggered by his shenanigans after just 10 seconds (which he says is often not the case) and the FordPass app sent him a notification, but by going through a few “additional steps” as he puts it, those too can be bypassed.

“An expert car thief will also have a cellular/wifi/GPS jammer active while picking open the door, the FordPass system would be rendered useless,” wrote one viewer.

According to CarBuzz.com, the Lishi lock picking tool can also be used to break into other Ford vehicles such as the Ranger, C Max, Fiesta, Focus, Fusion, and EcoSport, as well as the Land Rover Range Rover and Range Rover Sport, and some Volvo models including the XC90.

Unfortunately, he doesn’t explain what tool all the kids that are stealing hundreds of Mazdas have been using to fulfill a stupid social media challenege.