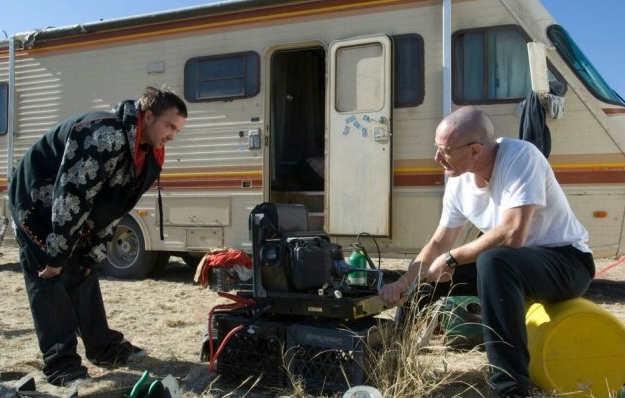 We are less than a month away from the release of the Breaking Bad movie, and there are millions of fans who can’t wait until El Camino arrives on Netflix. But there was a time that nobody knew who Walter White and Jesse Pinkman were, let alone most of the previously unknown cast. Let’s watch the first videos that helped shape the “good guy gone bad” TV show that took home 16 Primetime Emmy Awards and was nominated for 58 times, the Breaking Bad auditions.

Long before Aaron Paul became everyone’s favorite stoner turned meth cook, he was struggling to find his big break in Hollywood. Paul started his acting career as a character named “Chad” in a 1999 episode of Beverly Hills, 90210. For nearly a decade following that, Aaron had minor parts in TV shows such as “Frat Boy #2” in Melrose Place a student in 3rd Rock from the Sun, “Teen #1” in Sleeper Cell, and a “wasted guy” in Van Wilder: Party Liaison. Then one audition turned him into a household name and Hollywood star.

The casting department initially thought that Aaron Paul was too old to play Jesse Pinkman. They also believed he was too attractive and his teeth were too white to play a meth head. After Paul’s spectacular audition, all of their worries melted away and Aaron was cast as Jesse Pinkman.

Then, Paul’s acting was so impressive during the first episodes of the first season of the series that it impressed Breaking Bad creator Vince Gilligan. That was a monumental achievement because Gilligan had initially planned to have Jesse Pinkman killed off in the first season on the final episode in a drug deal gone wrong.

In the initial plot, Jesse’s premature death, which would have been partly White’s fault, would have sent Walt into revenge mode. Walter would kidnap the drug dealer who killed Jesse and “lock him up in a basement, torture him every day, removing his toes one-by-one and cauterizing the wound with a blowtorch so he wouldn’t bleed out,” according to IndieWire.

In typical Breaking Bad style, there was a major twist where “Walter would give the drug lord a way out—a trip-wire connected to a shotgun pointed at him would finally give him relief from the pain. But the drug lord, being so bad-ass, would never take that option out. This would continue for weeks until Walter Jr. would discover him and try to help. The drug lord, realizing this was Walter’s son, would pull the tripwire, killing them both.”

AMC execs thought that the gruesome deaths were a little too over-the-top, even for Breaking Bad. Jesse lived and will now star in the Breaking Bad movie.

There isn’t a Bryan Cranston audition tape because Gilligan hand-selected him for the role of Walter White. Gilligan and Cranston worked together in the 1998 X-Files episode titled “Drive.” Cranston played an unlikeable person who had a terminal illness who took David Duchovny’s character Fox Mulder hostage. By the end of the episode, you start to feel sorry for Cranston’s character. Sound familiar?

“We had this villain, and we needed the audience to feel bad for him when he died,” Gilligan told The New York Times in 2011. “Bryan alone was the only actor who could do that, who could pull off that trick. And it is a trick. I have no idea how he does it.”

Despite Gilligan knowing that Cranston was perfect for the role of Walter White, the studio heads at AMC thought he was not serious of an actor, mostly because of his character Hal on the comedy show Malcolm in the Middle as well as his role as Dr. Tim Whatley on Seinfeld. AMC attempted to cast John Cusack and Matthew Broderick for the chemistry teacher turned meth kingpin, but both declined the opportunity, allowing Cranston to get the role of a lifetime.

Bialy was absolutely blown away by Banks’ audition for Breaking Bad that she wrote a casting note read: “Does it get any better? So good!!”

El Camino will be available on Netflix starting on October 11th.

RELATED: Sony Is Making ‘Breaking Bad’ Beer Appropriately Named ‘Schraderbrau’ And Hank Schrader Is All For It