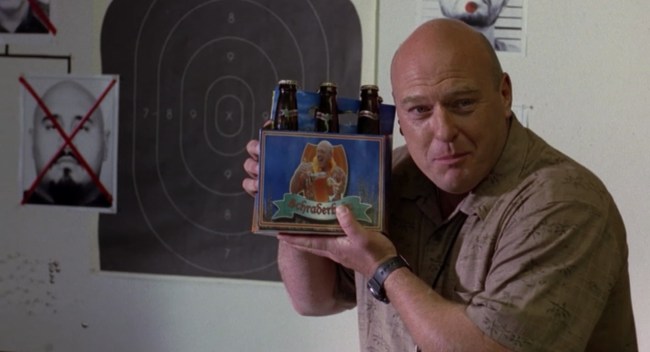 Sony Pictures Television plans to make a Breaking Bad-themed beer and there is only one possible name for the brew — Schraderbrau. If that sounds familiar it is because Schraderbrau is the name of the beer Hank Schrader brewed at his New Mexico home. Last week, there was a buzz about the beer when Breaking Bad actor Dean Norris shared a video from a brewery where he said, “just uh, brewing up some ideas, if ya know what I mean.” Then he dropped his tag line of, “Schraderbrau, brewed to silky perfection.”

Breaking Bad ended back on September 29, 2013, but in the past year, Dean has been randomly promoting the then fictional Schraderbrau beer, which was first seen in Episode 5 of Breaking Bad‘s second season. Wouldn’t you have to order Schraderbrau on the rocks? That would drive Hank crazy and he’ll correct you and say, “They’re minerals.”

Bout time for some Schraderbrau up in this here Twitter pic.twitter.com/ETLNTk41vM

Sony Pictures Television has filed several trademark applications related to Vince Gilligan’s hit TV show that first arrived back in January of 2008. This month, Sony filed trademarks with the United States Patent & Trademark Office for a Schraderbrau beer, luminous signs, drinking glasses, and bottle openers, t-shirts, sweatshirts, and hats. Sadly, Sony did not file for any flamethrower trademarks, so don’t expect Breaking Bad, the flamethrower anytime soon. There were no trademark applications for Walter White meth either.