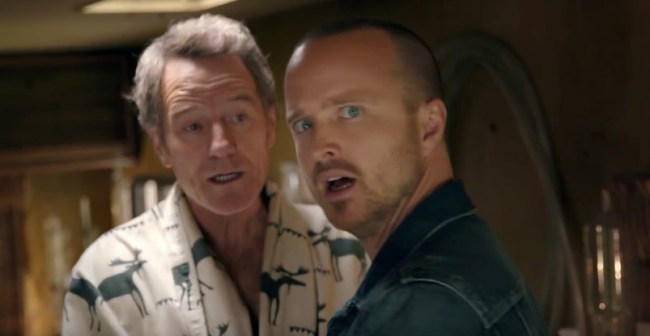 We’re currently living in the Golden Age of television— a time when it’s virtually impossible to keep up with the exhaustive number of shows people insist you have to watch if you want to consider yourself proficient in pop culture.

I can’t even count the number of pilots I’ve watched over the years with the full intent of binge-watching a critically-acclaimed series only to be dissuaded by the commitment it would take to make my way through every single episode. I’m sure Mad Men is great, but at this point in my life, there’s no way I’m slogging through seven seasons.

However, there are certain shows that have gotten me instantly hooked and I don’t know if anything has sucked me in more than the first episode of Breaking Bad, which I devoured in an unhealthy amount of time when I first gave it a shot a few years ago.

As a result, I was thrilled when Vince Gilligan revealed a Breaking Bad movie— tentatively titled Greenbrier— was in the works last year but it was unclear exactly who’d be reprising their roles.

However, it looks like we’re in for quite the treat if some new rumors are to be believed.

On Thursday, Revenge of the Fan announced they’d gotten their hands on some inside info and it appears the entire gang is getting back together for the movie:

And as cool (and as potentially revealing) as some of those names are, the two names sure to excite Breaking Bad fans are Krysten Ritter, and “Mr. White” himself, Bryan Cranston!

When the project was initially announced, most people assumed it would be a sequel, but when you consider the fates of many of the characters who will reportedly be in the film, that doesn’t appear to be the case.

It’s currently unclear when Greenbrier (or whatever it ends up being called) will be released but that day can’t come soon enough.